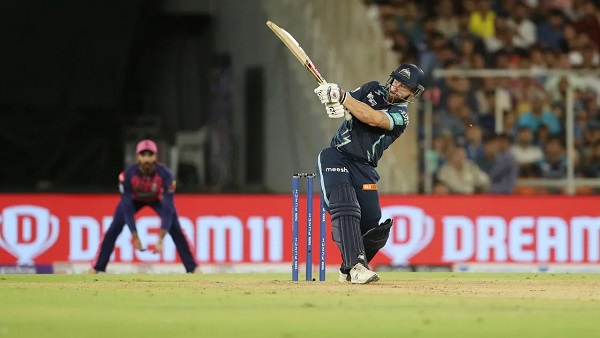 Ahmedabad : The Indian Premier League (IPL) 2022 trophy has been won by Gujarat Titans by defeating Rajasthan Royals. With this, the Gujarat team has emerged as a new champion in the IPL. At the same time, Rajasthan’s dream of winning the trophy for the second time in IPL has been shattered. Rajasthan had won the first season in the year 2008.

Batting first, Rajasthan had scored only 130 runs for the loss of 9 wickets in the allotted 20 overs. In reply, Gujarat easily achieved the target with 7 wickets in hand.

Also read- VIDEO: Jos Buttler’s bat did not play in the final, threw the helmet in anger

Batting first, Rajasthan got off to a cautious start with Yashasvi Jaiswal and Jos Buttler. However, with the early dismissals of Jaiswal (22), Sanju Samson (14) and Devdutt Padikkal (2), the pressure mounted on Butler. Then Hardik got him out and brought him on the back foot. Butler scored 39 runs. After Samson and Butler, Hardik did not even allow Shimron Hetmyer to run. Hetmyer was dismissed after scoring 11 runs. On the other hand, Sai Kishore took the prey of R Ashwin (6) and Trent Boult (11). As such, Rajasthan managed to score 130 runs for the loss of 9 wickets. Riyan Parag scored 15 runs in the end for them. Apart from Hardik in bowling for Gujarat, Sai Kishore took 2 for 20 in 2 overs, Rashid Khan took 1 for 18 in 4 overs, while Shami (1-33) and Yash Dayal (1-18) also took 1 wicket. Took one wicket each.

While chasing the target, Trent Boult dismissed Shubman Gill in the first over, but Yuzvendra Chahal gave life after leaving a simple catch. However, in the next over, fast bowler Krishna got Wriddhiman Saha (5) to give the team the first breakthrough. Then in the fifth over, Boult got Matthew Wade (8) caught by Ryan Parag. Gujarat scored 31 runs for the loss of 2 wickets in the first 6 overs. During this, Shubman (0 and 13) got two life donations. Ashwin bowled in the 12th over. Then Gujarat needed 69 runs in 54 balls to win. However, Hardik Pandya welcomed Ashwin with fours and sixes and shared a 43-ball 50-run partnership with Shubman. Ashwin conceded 15 runs in the first over. Due to this, Chahal was called again to bowl and he dismissed Hardik (34) in the 14th over. Then Ashwin was made his victim by David Miller and Rajasthan lost their grip on the match. Gujarat needed 22 runs from 24 balls and had 7 wickets in hand. David Miller’s sharp shot ensured Gujarat’s victory. Gill (45) and Miller remained unbeaten on 35 off 19 balls. Thus Gujarat won the match with 11 balls to spare.