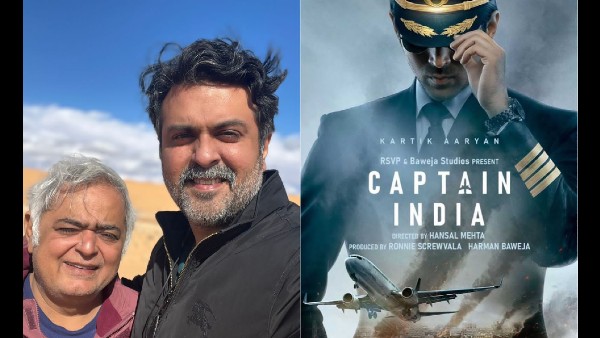 The first look of Captain India featuring lead actor Kartik Aaryan took the internet by storm. Kartik Aaryan will be seen in the role of the pilot and Harman Baweja will also be seen playing a special role. It is being told that this is a historical and thrilling story.

Produced by RSVP of Baweja Studios and Ronnie Screwvala and directed by Hansal Mehta, the film is one of the most awaited projects of the year. Though not much has been revealed yet, according to our sources, the makers are doing international recce for the film.

A source reveals, “Harman Baweja and Hansal Mehta are doing the recce for Captain India. The location is yet to be revealed. The recce for the film’s international schedule is in a foreign land. Given the anticipation surrounding the project. Well, the makers don’t want to leave any stone unturned.” Meanwhile, a happy picture of Harman Baweja and Hansal Mehta has also surfaced on the internet.

Both are in a foreign land in a desert with blue sky! Giving air to the speculations, both were also seen at the international airport. Captain India is one of the most successful rescue operations in Indian history that everyone awaits.

Apart from this, Harman Baweja is busy with the remake of The Great Indian Kitchen, which stars Sanya Malhotra in the lead role. The producer-creator has also wrapped up the shooting of the Punjabi film Honeymoon with Gippy Grewal and Jasmin Bhasin in London.