Harshal Patel became the second bowler of IPL to bowl 2 maiden overs, know who is the first
Advertisement 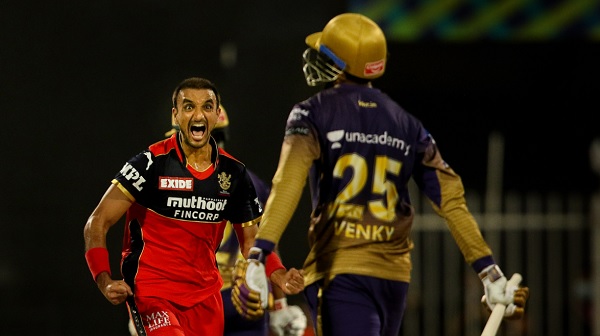 New Delhi, March 31: RCB’s bowling, which was beaten in front of Punjab Kings, appeared in full swing against KKR. Harshal Patel once again dominated the bowling as he dismissed Sam Billing and Andre Russell for just 11 runs in 4 overs. Apart from this, Hasaranga took 4 wickets for 20 runs in 4 overs.

But Russell’s wicket by Herschel proved to be quite an impact in the match as this player has the ability to turn the match on stand-by. By then Russell was trying to settle down by playing an innings of 25 runs off 17 balls and he had hit three sixes.

After two big sixes by Russell in Shahbaz Ahmed’s over, the star batsman was dismissed on a wide delivery from Harshall’s perfectly perfected.

Harshal did not concede a single run in his first two overs, during which he added to KKR’s troubles by dismissing Billings and Russell.

By doing so, Harshal became the second bowler in the history of the Indian Premier League to bowl 2 maidens in an innings. Harshal equaled his teammate Mohammad Siraj’s record for most maidens in an IPL innings.

Siraj also got this milestone against Kolkata Knight Riders. Siraj did this feat in IPL 2020 in Abu Dhabi.

Despite the excellent performance of the bowlers, RCB were on the verge of losing the second consecutive match of the season 2022, but Harshal Patel did a great job in the batting as well and Venkatesh Iyer’s two consecutive fours in the 19th over worked as a relief for RCB. After this, in the last over, Dinesh Karthik did the job very brilliantly just to complete the formality.

IPL 2022: Dinesh Karthik, captain Faf compared Dhoni with smoke in both the matches