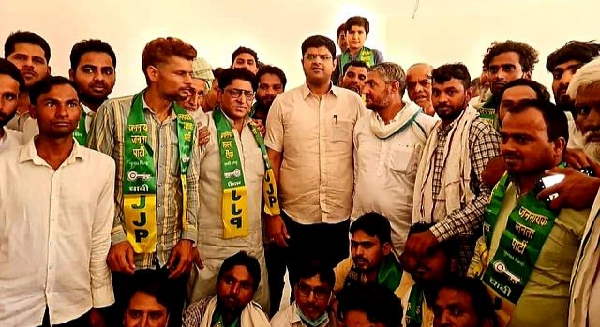 Chandigarh, 20 April 2022Jannayak Janata Party got more strength in Mewat region when Congress MLA from Punhana and former minister Mohammad Ilyas’s son Advocate Javed Khan along with hundreds of his supporters announced to join JJP. In Delhi, Haryana Deputy Chief Minister Dushyant Chautala felicitated Javed Khan and all his associates and welcomed them in JJP.

Deputy Chief Minister Dushyant Chautala said that all the new comrades who have joined the party will get full respect and due to their arrival, the party has got more strength not only in Punhana but in the entire Nuh region. He said that in the coming times also new strong colleagues would be attached to the party. Dushyant Chautala said that JJP’s membership drive is going on across the state. He said that so far about six and a half lakh new members have been added to JJP under this campaign which will run till April 25.

Joining JJP along with hundreds of supporters including District Councilor Bilal, Javed Khan said that influenced by the working style of Deputy Chief Minister Dushyant Chautala and the policies of JJP, he has decided to join the party and whatever responsibility will be assigned to him by the party. They will do well. On this occasion JJP district president Iqbal Zaildar from Nuh, national executive member Badruddin, national publicity secretary Dalbir Dhankhar, former MLA Gangaram, Vinesh Gurjar, Rishiraj Rana, Shailja Bhatia, youth state secretary Munfaid Khan and many others were present.

Sanjay Raut said on loudspeaker – National policy should be made on this, first of all it should be implemented in BJP ruled states