Hasranga reached near the Purple Cap after breaking Hyderabad's back, took the first five-wicket haul of IPL career
Advertisement 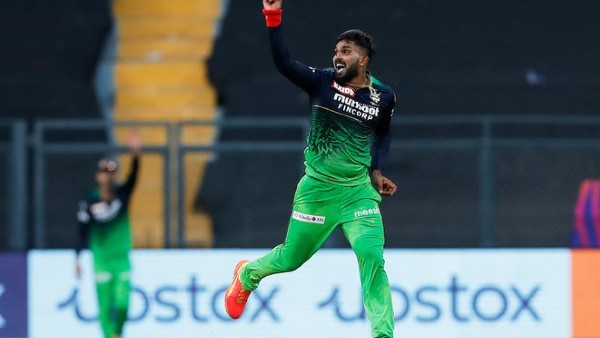 New Delhi.
The 54th match of the 15th season of the Indian Premier League was played at the Wankhede Stadium in Mumbai, where the Royal Challengers Bangalore team won against Sunrisers Hyderabad by 67 runs and retained the fourth position in the points table with 14 points. In this match played at the Wankhede ground, RCB won the toss and elected to bat and captain Faf du Plessis (73) scored an unbeaten half-century, Rajat Patidar (48), Glenn Maxwell (33) and Dinesh Karthik (30). On the basis of explosive innings, he scored a huge total of 192 runs for the loss of 3 wickets in the stipulated 20 overs.

In reply, Sunrisers Hyderabad started chasing runs and like RCB, they too lost the wicket of Kane Williamson on the first ball of the innings due to run out. At the same time, Maxwell also hit opener Abhishek Sharma in his very first over and gave a double blow to the Hyderabad team in the very first over.

Read more: Prithvi Shaw will not return to Delhi team even against CSK, sad pictures for fans before match

After this, Rahul Tripathi (58) and Aiden Markram (21) put on a 50-run partnership while handling the innings and as soon as it seemed that the Hyderabad team could make a comeback, Vanindu Hasaranga came to bowl, who took Markram in his very first over. Taking wickets not only broke the partnership but completely changed the course of the match.

Nicholas Pooran (19) also tried to take the innings forward by partnering with Rahul Tripathi but Hasranga once again trapped in his spin to break the partnership and sent Pooran back to the pavilion. Jagdish Suchit (2), who came to bat after Pooran’s departure, also could not do much and returned to the pavilion after being stumped by Hasranga’s ball.

Read more: Chennai can still qualify for IPL 2022 playoff, know what is the equation

When Hasaranga came to bowl the last over of his spell in the 17th over, he took the wickets of Shashank Singh and Umran Malik in two consecutive balls to get the first five-wicket haul of his IPL career. Due to which Sunrisers Hyderabad team could score only 125 runs and RCB won by 67 runs. In this match, Hasaranga bowled an over maiden in a spell of 4 overs and took 5 wickets for just 18 runs.

Apart from Hasranga, Josh Hazlewood also took 2 wickets, while Harshal Patel and Glenn Maxwell also got one wicket each. With this five-wicket haul, Vanindu Hasaranga has moved up to the second spot in the list of highest wicket-takers in IPL 2022, just one wicket behind purple cap holder Yuzvendra Chahal (23 wickets).

Caught in Hasranga’s spin, SRH lost the fourth match in a row, RCB won by a huge margin of 67 runs