'He is also a spoiled Sanghi like me...', Kangana Ranaut shares 4 pictures of Will Smith
Advertisement 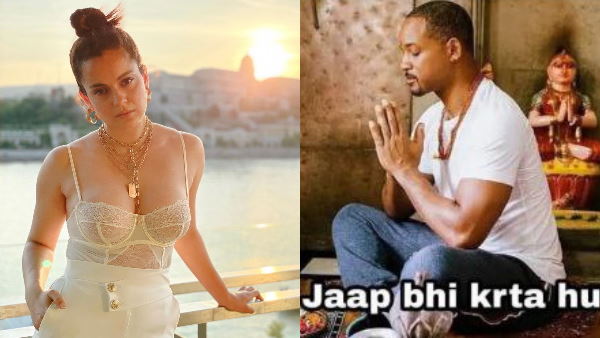 Kangana shared a collage of 4 pictures of Will

Kangana Ranaut on Tuesday shared a meme on her Instagram story about the slap in the Oscars ceremony, in which she made a collage of pictures of Will Smith. In this collage, he included four pictures of Will Smith, two of which he was seen worshiping in Hindu rituals, one with spiritual guru ‘Sadguru’, while the fourth picture slapping comedian Chris Rock. The incident was

‘Prove that Will Smith is a unionist’

Let us tell you that a member of the Rashtriya Swayamsevak Sangh or a person who supports its ideology is often called as Sanghi. Earlier on Monday too, Kangana Ranaut shared a post in support of Will Smith. Kangana wrote in this post- ‘If a stupid person makes fun of my mother or sister’s illness, then I will also slap him like Will Smith.’

‘I did all that out of emotion’

At the same time, earlier on Monday, Will Smith apologized to comedian Chris Rock for his actions through social media. Will Smith wrote in his Instagram post, ‘Violence in any form, it is poisonous and destructive. My behavior at the Academy Awards ceremony last night is neither acceptable nor forgiven. In my opinion, making jokes on someone is part of the job, but it was unbearable for me to joke about Jada’s illness, due to which I did all that out of emotion.’

‘I was wrong and am ashamed of what I did’

In his post, Will Smith further wrote, ‘I want to publicly apologize to you, Chris. I was wrong. I am ashamed of my actions and my actions are not indicative of the person I want to be. There is no place for violence in the world of love and kindness. Also I want to apologize to the Academy, the makers of the show, the people present there and everyone around the world who is watching it. It has been a wonderful journey for all of us and I regret that my behavior has tainted it.’

Will Smith’s wife suffers from which disease?

Will Smith’s wife Jada Pinkett has been suffering from alopecia disease for the past one year, due to which she has lost hair on her head. Jada Pinkett, while posting a video on her Instagram in the year 2021, told that she has been diagnosed with Alopecia Areata. Simply put, Alopecia Areata is an autoimmune disorder, in which the person suffering from the disease starts losing hair on the scalp. This disease can happen to any man or woman.

Also read- ‘The joke is fine to an extent, but…’, what did Salman Khan say on Will Smit’s slap scandal

After the slap scandal, the sale of tickets for Chris’s show increased

At the same time, comedian Chris Rock has got an advantage after slapping Will Smith at the Oscar Awards ceremony. In fact, Chris Rock is scheduled to perform back-to-back stand-up shows at the Wilbur Theater on March 30, 31 and April 1, and ticket sales for his show have skyrocketed since the slapstick incident. The company selling tickets for the show said that since this Sunday there has been a huge increase in ticket sales compared to last month.

John Abraham said – Going to Kapil’s show does not make the film a hit, given the example of this movie