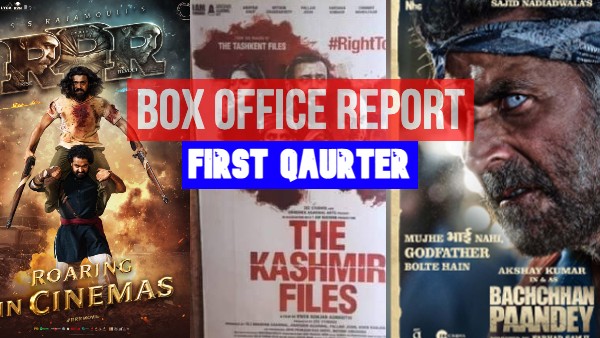 As such, after the release of Sooryavanshi, there was a line of films.But with the slowing down of 83, another knock of Corona stalled the whole plan. Where films from RRR to Gangubai and Radhe Shyam to Prithvirat were supposed to explode in January itself, with Corona’s next knock, all January releases were pushed ahead. Otherwise the figures for the first quarter would have been different.

The pace of films remained slow in February. Only three films released at the box office in February. Congratulations Valimai Hindi and Gangubai Kathiawadi. All the three films could not extract their earnings at the Hindi box office. Where Badhaai Do had a budget of around 35 crores, the film earned only 19.5 crores and became a flop. At the same time, the budget of Gangubai Kathiawadi was also 180 crores. The film could only earn 128 crores.

The month of March started with the English film Batman which earned a whopping 44 crores. After that every week, movies were released, clashed, some were hits and some were flops. The biggest disappointment of the month of March was Prabhas starrer Radhe Shyam. Made on a budget of about 350 crores, this film was a disaster at the Hindi box office. At the same time, Amitabh Bachchan starrer Jhund earned 17.2. However, the budget of this film was also 22 crores.

The Kashmir Files took over

But Vivek Ranjan Agnihotri’s film The Kashmir Files took the lead at the box office. The film released on March 11 and clashed with Radhe Shyam. The film gave an opening of 3.5 crores. But the word of mouth of the film was so strong that every day it kept increasing its earnings. The Kashmir Files earnings are still going on and the film has so far achieved the blockbuster title with the collection of 236 crores.

earning will not stop

Overall, the first quarter from January to March has earned around 640 crores at the Hindi box office. The good news is that for the time being, The Kashmir Files and RRR will not stop earning at the box office. It will be very interesting to see how long the earnings of these films continue and what will be their lifetime collection.

If compared, the first quarter of 2020 has

783 crore
In which Tanhaji had emerged as the biggest film.

Tanhaji made 279 crores
had earned. Before Corona, the last big film to be released was Tiger Shroff’s

Baaghi 3 which made 97 crores
had earned. in the first quarter of 2020

After this, only in the first quarter due to the Corona period in 2021.

100 crore
Didn’t even earn. The biggest film during this time was

Roohi who got 25 crores
had earned.

Alia Bhatt broke silence on the news of displeasure with SS Rajamouli, said this thing!

These superstars including Salman Khan and Chiranjeevi will launch the teaser of Kicha Sudeep’s Vikrant Rona!