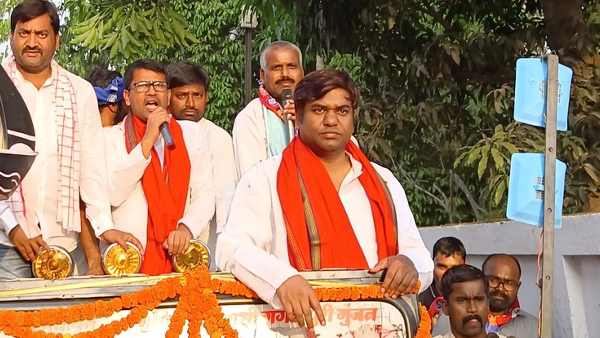 Patna, April 16. The by-election results of the Bochaha assembly seat of Bihar have once again given a different indication of the political direction of the state. Here the victory of RJD and the crushing defeat of BJP has many meanings. VIPs cannot be ignored in this big victory of RJD. In the Bihar by-election 2022, due to direct injury to the BJP’s vote bank, the BJP has suffered a crushing defeat here. Mukesh Sahni’s disillusionment with the NDA in the Bhumihar Bahula area is believed to be a major reason for this. On the other hand, Mallah Samaj is considering the defeat of VIP as victory. The experience of victory in the defeat of VIP is creating a different story in Bihar’s politics.

The effect of these Bihar by-election results, held two years before the Lok Sabha elections, can be seen for a long time. The results of the Bochahan assembly by-election, which has become the pivot of Bihar’s politics, have come. Here RJD has registered a big victory. Though RJD was behind in the first round of Bochahan’s trend, but as the counting of votes progressed, it turned in favor of the trend. RJD’s Amar Paswan won here by 36,653 votes. RJD got a total of 48.52% votes in Bochahan assembly seat. In the last election, Amar Paswan’s father got 42.6% of the votes. This time it’s 6% higher.

New political equations created in Bochan
The situation created a new formula of social equation. In Bochahan, RGD was giving direct competition to BJP. At the same time, Mukesh Sahan’s Vikassheel Insaan Party (VIP), which broke away from the NDA, emerged as the third party, which drowned the BJP’s loot in Bochan. However, VIP appeared to be successful in its objective to a large extent. He expected the defeat of BJP more than his performance and the same thing happened. In the Bochahan by-election, Geeta Kumari of VIP stood third, while Congress stood at the 6th position. Here RJD candidate Amar Paswan got 82562 votes in a total of 25 rounds of counting. BJP’s Baby Kumari got 45909 votes and VIP’s Geeta Kumari got 29279 votes.

VIP’s vendetta spoiled BJP’s game
RJD’s victory in Bochahan may now lead to a new caste alliance. It remains to be seen where Mukesh Sahni’s party will be VIP along with Bhumihar Samaj. However, one thing has been decided that the third major contender of Bochahan, which has become a stronghold of Bihar’s politics, is VIP. Who had tried to obstruct the BJP’s path in the UP assembly elections, despite being involved in the government with the grace of the BJP in Bihar. When the BJP showed the way out of the government to the VIP chief and minister Mukesh Sahni, he started working with a sense of revenge as soon as the election process started in Bochan.

In search of a new base, the VIP inflicted a severe blow on the BJP.
However, all the elections were do or die situation for them. The VIP used all his energy to defeat the BJP. The Vikassheel Insaan Party chief is hopeful that now after the defeat of the BJP, it will be easier for him to find a base for his party again.

Tejashwi passed the litmus test
Bochahan is a Bhumihar dominated area. In such a situation, it was not easy for RJD to win here. Here there was a need to think out of the Muslim-Yadav equation. Due to which it was no less than a litmus test for Tejashwi’s Yadav. But there was also a VIP to facilitate this task, whose only objective was to defeat the BJP.

Mallah society changed from BJP
BJP has suffered a major setback in Bhumihar dominated areas. The society has voted for RJD. It is believed that Mallah Samaj also avenged the insult of Mukesh Sahni by defeating BJP. RJD was only behind in the first round, after that its lead did not diminish.

MNS furious for not removing loudspeakers from mosques in Maharashtra, said this about Sanjay Raut after ultimatum

Harbhajan Singh took a noble decision as soon as he became an MP, will spend salary for the daughters of farmers