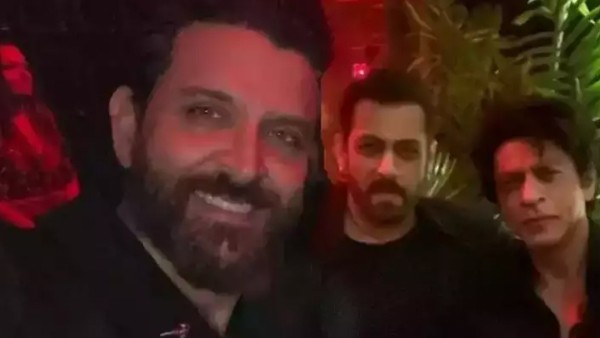 Hrithik Roshan reached this party with his girlfriend Saba Azad. Hrithik’s special friend Preity Zinta also shared a picture with the two and from the same picture, Hrithik Roshan was cut and pasted on the picture of Salman Khan and Shah Rukh Khan.

What is Spy Universe?

After the blockbuster success of Avengers in Hollywood, the effort to create a universe in Bollywood has gained momentum. And there have been rumors for a long time that now Aditya Chopra will try to make a banging SPY Universe with Yash Raj Films. Three spies/officers of Yash Raj film will come together in this universe.

War sequel is being planned

These three spies are War’s Kabir i.e. Hrithik Roshan, second will be Tiger’s Avinash i.e. Salman Khan and third will be Pathan’s Shahrukh Khan. Now just imagine the film in which these three superstars will be together, how big that film will be. Not only this, Yash Raj Films has decided that War, Tiger and Pathan will be separate franchises. In this sequence, the war sequel is also being planned.

will get a glimpse

Just since these news started intensifying in the gossip street, the fans are very excited to see these three stars together. This is the reason why he didn’t get a chance that he made Shahrukh – Hrithik and Salman Khan stand in one frame. However, whether it will become a spy universe or not, it is too early to say.