I wish there was Warne today, but he is watching us proudly from above, Jos Buttler pays heartfelt tribute
Advertisement 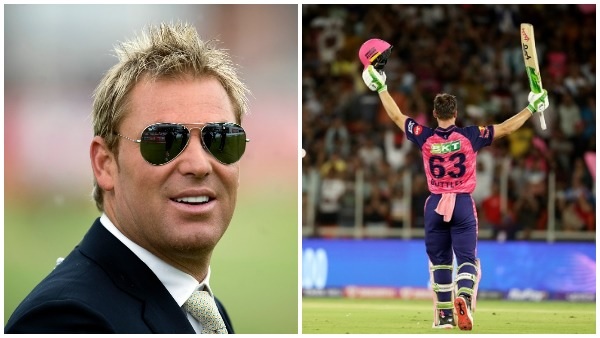 Butler was adjudged man of the match

He made an unbeaten 89 in the first playoff match and now after his unbeaten 106 in the second qualifier, Rajasthan Royals have crushed Royal Challengers Bangalore by 7 wickets and reached the final of IPL 2022. Jos Buttler was adjudged man of the match to help with these two big feats as he will now take on Gujarat Titans.

During his century on Friday, he became the second player after Virat Kohli to score 4 centuries in a single IPL season and the third player after Kohli and David Warner to break the 800-run mark in a single season.

Jos Buttler is set to take home the Orange Cap but his eyes will be on RR’s second IPL title. For the first time in 2008, the first season was won under the captaincy of Shane Warne. Warne died of a heart attack earlier this year.

Butler told Star Sports, “Very excited to be able to play in the final of the biggest T20 tournament in the world. Shane Warne has been a huge influence on Rajasthan Royals. We will miss Warne a lot but we know he is today. Looking at us with great pride.”

The English star said he had come into the tournament with low expectations but added that he had a lot of energy.

Butler said, “I came into the season with very low expectations but a lot of energy. Standing in the finals is very exciting. I had a two-part season, and had very honest conversations with people close to me. I I felt the pressure had come in between, and about a week ago I opened up about it. It helped and I went to Kolkata with an open mind.

Jos Buttler has so far scored 824 runs at an average of 58.86 including 4 centuries and 4 fifties with one match left.

‘sincere thanks ! Neither he would reject, nor would he become the king of IPL.

I did not forget that run of Warne and Tanveer in 2008, Samson is going to create a new history of RR on the blurred memory