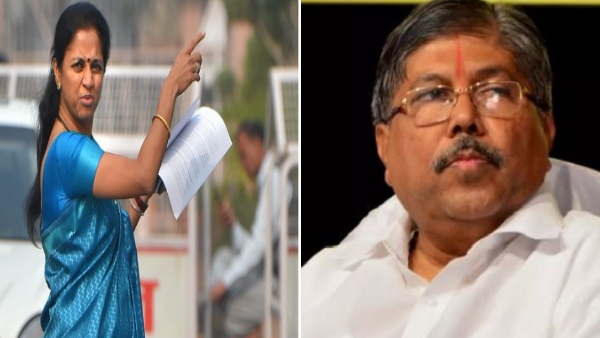 Mumbai, May 26: Maharashtra BJP President Chandrakant Patil has landed in controversy after making sexist remarks on Nationalist Congress Party MP Supriya Sule. Patil, who is leading the protest against the state government over the issue of OBC reservation, told Sule “If you don’t understand politics, go home and cook.” BJP leader Patil spoke this for Supriya Sule, who is a minister of Maharashtra and is also the daughter of Communist Party of India supremo Sharad Pawar.

Sule raised this question
Earlier on Wednesday, Supriya Sule was addressing a party meeting on the same issue. Questioning how BJP-ruled Madhya Pradesh got relief from the Supreme Court on OBC reservation, he said, “The Chief Minister of Madhya Pradesh came to Delhi and met ‘someone’… I don’t know what happened all of a sudden. Next two days And they got the green signal for OBC reservation…”

Patil said this to Sule
Patil, who was protesting at a distance from where Supriya Sule spoke, responded to her statement. He said, “Why are you in politics? Go home and cook. You are in politics and you don’t understand how to meet the CM? You also go to Delhi or hell or anywhere, but give reservation.”

Sule’s husband gave this answer to Patil
Meanwhile, Supriya Sule’s husband, Sadanand Sule, who stays away from politics, targeted Chandrakant Patil. Sadanand took to social media to condemn the statement and said that he is proud of his wife. I have always maintained that. “I have always said that they (BJP) are misogynistic and despicable women whenever possible. I am proud of my wife who is a homemaker, mother and a successful politician who lives in India. She is one of many other hardworking and talented women. This is an insult to all women.”

Politics heating up regarding OBC reservation
The politics of Maharashtra has heated up in the last few months after Scheduled Castes banned political reservation for OBCs in local bodies. While the BJP has blamed the state government for losing the battle for OBC reservation in the courts, the ruling MVA has accused the Center of not providing empirical data.

For the first time, children will sit in place of 182 MLAs in the assembly, CM and a leader of opposition will also become

Before Kapil Sibal, 5 big names of Congress, who left the party in the last five months