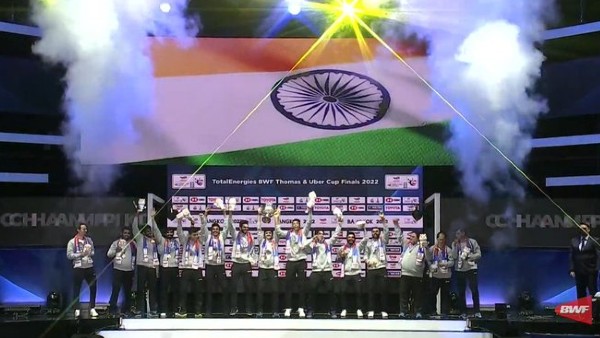 Winning the first title as a team is special

Former Indian cricket team batsman VVS Laxman wrote that we have personally won the championship many times in this game but winning the first title as a team is awesome. Thanks to every player of the Indian team who contributed to winning the Thomas Cup, who made this dream come true. We are all proud of you.

At the same time, the wicket-keeper batsman of the Indian cricket team, Dinesh Karthik, wrote that brilliant, very brilliant, this victory cannot be described in words. Defeating every champion team is a big achievement in itself, but defeating them and winning the first title is a huge feat. Many congratulations on creating history for the Indian badminton team.

On the other hand, Harbhajan Singh, off-spinner of the Indian cricket team wrote that the Indian badminton team won the title in style. Congratulations to everyone for creating history in a special way. Many congratulations to Kidambi Srikanth, Lakshya Sen, Satwiksai Raj, Chirag Shetty and HS Prannoy for bringing home the Thomas Cup. Proud of you all Champs.

The former opener of the Indian cricket team also took to Twitter to congratulate and wrote that history has been made, welcome to India Thomas Cup, incomparable performance, Jai Hind.

Former Indian cricket team captain Virat Kohli has also congratulated his victory and wrote on Twitter that this is a very historic and big moment for Indian badminton. Congratulations to the Indian team for winning the Thomas Cup.

Proud day for every Indian

Congratulating on this achievement, Sachin Tendulkar, who is known as God in the cricket world, wrote that it is a historic moment for every Indian. A wonderful day in the game of badminton, many congratulations to the entire team on winning the first Thomas Cup for India.

no one can tell it can’t be

Indian football team captain and veteran player Sunil Chhetri also congratulated him on this historic victory and wrote that it is a very memorable moment from the point of view of Indian sports – we became Thomas Cup champions for the first time and we beat the best team of this game. This title has been achieved. Congratulations to every player and team staff for this achievement. Some things take time, but don’t let anyone tell you that it can’t happen.

Indian women’s badminton star Saina Nehwal also congratulated the team on this victory and wrote that many congratulations for the men’s team winning the Thomas Cup. Kidambi Srikkanth, Lakshya Sen, Satwik Raj, Chirag Shetty and HS Prannoy have provided impressive wins. It is noteworthy that in the Uber Cup, called the World Cup of Badminton in the women’s section, the Indian team had to face defeat in the quarterfinals, in which Saina Nehwal was also doing well with PV Sindhu.

Pictures of Sara Tendulkar created a sensation, the person said – life is incomplete without you

Thomas Cup: This video of the last moments of victory will make the chest wide and the eyes moist, see how the tricolor was waved in the court