India created history in Thomas Cup, then Sports Minister Anurag Thakur was convinced, told how much will be rewarded
Advertisement 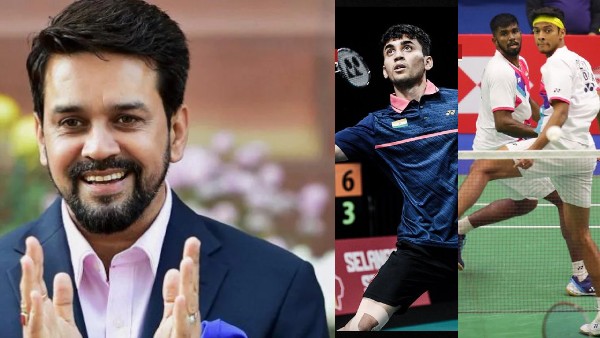 New Delhi. In the Thomas Cup played in Thailand, the Indian badminton team created history by defeating 14-time title champion Indonesia 3-0 in the final and for the first time in 73 years, India got its first win in this tournament called Badminton World Cup. has worked. The Indian badminton team’s victory in the Thomas Cup is special in many ways, it is the same victory for India as it got in the 1983 Cricket World Cup. There, India won the first World Cup title by defeating the dominating West Indies team in the final, while in badminton, India won the first Thomas Cup by defeating 14-time champion Indonesia 3-0.

For Indian badminton, this win is not only historic but is going to prove to be a milestone because before this victory, Indian badminton players had achieved many records individually but never won the title as a team. Even before this in the 73-year history of the Thomas Cup, India had reached the semi-finals only once (1979).

The Thomas Cup is the only event in which participating countries play as a team, where the result is based on a five-match event. During this 3 singles, one doubles and one mixed doubles matches are played and to win the title players have to win on a team basis.

Taking forward the success achieved in the Olympics last year, Indian badminton made history in this tournament and first made it to the semi-finals after 43 years, then avenged the previous defeat by defeating Denmark in the semi-final match and finally the Indonesian team’s reign. It has become the sixth team after China, Malaysia, Japan and Denmark to win the title.

Read more: ‘If Umran breaks my record then..’ Shoaib Akhtar gave big advice to the Indian pacer regarding bowling

The whole nation is happy with this victory of the Indian badminton team and Union Sports Minister Anurag Thakur is also included in this happiness, who has announced a cash reward while congratulating the Indian team for creating history in the Thomas Cup. Congratulating him on his official Twitter account, he wrote, ‘Indian team has won its first Thomas Cup by defeating 14-time champion Indonesia 3-0. This is a historic day for Indian sports, which we all are proud of. Players will be given a reward of one crore rupees for this unexpected victory of India. Congratulations to the Indian team.

It is worth noting that India defeated five-time champion Malaysia in the quarter-finals to win their first title in the Thomas Cup, while defeating Denmark, who had won the title once, in the semi-finals, while defeating 14-time champion Indonesia in the final. Earned the title. It is like a golden page in the history of Indian badminton, which will bring revolutionary changes in this game like cricket in the coming times.

Mohammed Shami gave this advice to Hardik, compared with Dhoni-Kohli and Rohit