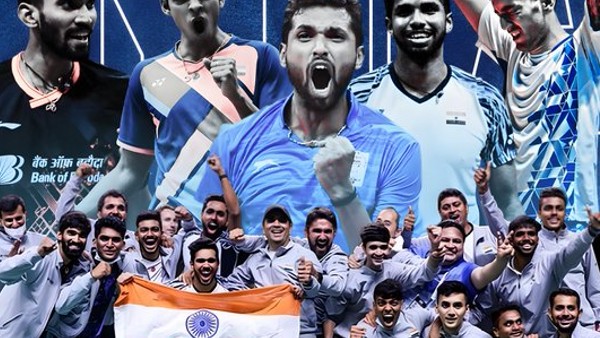 Won the title by defeating the 14-time champion

India has become the sixth team to win this title. In this tournament held 30 times, Indonesia’s team had dominated their one-sided dominance by winning the title 14 times and came out to play as the defending champion in the tournament played this year. Indonesia performed in the tournament according to its status and made it to the final. On the other hand, India‘s badminton team continued to make frequent upsets and won the first quarter-final 3-2, while in the semi-final match played against Denmark, after defeating Denmark in the last match, reached the final for the first time.

When the Indian badminton team went to play against Indonesia in the final, the fans were definitely expecting a victory, but no one had any idea of ​​such a one-sided victory. For the Indian team, Lakshya Sen went on to play against Indonesia’s Ginting in the first set, in which Ginting retained his dominance in the very first set to beat Lakshya Sen 8-21 to take a 1-0 lead. However, Lakshya Sen made a strong comeback in the next two rounds by defeating Ginting 21-17 and 21-16 in two consecutive sets to win the first match to give India a 1-0 lead.

In the second match, India’s Satwik Sai Raj and Chirag Shetty faced Indonesia’s Ehsan and Kevin in the men’s doubles match. Like in the very first match, here too, the Indonesian pair overpowered the Indian team in the first set and won the set 18-21. However, the Indian pair did not give up and took a close win of 23-21 and 21-19 in the next two sets to give India a 2-0 lead.

In the third match, former world No. 1 Kidambi Srikanth went to play for India, who faced Jonathan Christine, where Srikanth won the first set 21-15 to take a 1-0 lead. But in the second set, Christine made a tremendous comeback and this set was constantly seen going in favor of India and sometimes in favor of Indonesia. However, in the end Kidambi Srikanth created history by winning the set 22-21 and gave India a 3-0 win. With this victory, India became the sixth country to win the Thomas Cup. Indonesia has won the trophy 14 times, winning this tournament the most, while China has won the title 10 times. Malaysia’s team has also won this title 5 times, while Japan, Denmark along with India’s name has also been added to the team that won this title once.

Mohammed Shami gave this advice to Hardik, compared with Dhoni-Kohli and Rohit

‘Screaming from the dugout means that in the team..’, Kaif told why Hyderabad is flopping in IPL 2022