India made history by reaching the final of Thomas Cup 2022, for the first time confirmed silver medal
Advertisement 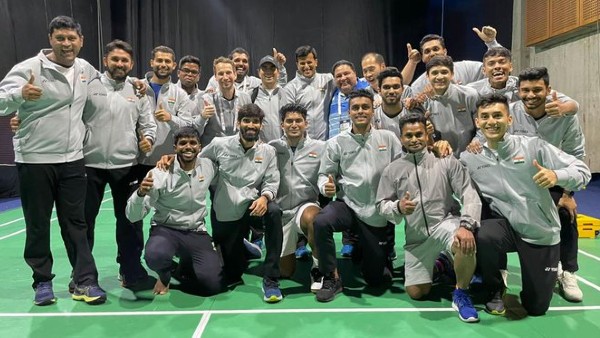 New Delhi. In the Thomas Cup 2022 played in Bangkok, Thailand, India‘s men’s badminton team created history and made it to the final of this tournament for the first time by winning 3-2 in the semi-final match played against Denmark. With this victory, India’s silver medal in the Thomas Cup has been confirmed. Earlier, the Indian badminton team had also won 3-2 against Malaysia in the quarterfinal match and reached the semi-finals of this tournament after 43 years.

With reaching the semi-finals, the Bronze medal of the Indian badminton men’s team was confirmed, but now after making a place in the final, the team has changed the color of the medal to silver. India has made it to the final for the first time in the 73-year history of the Thomas Cup, while the last time they reached the semi-finals of this tournament 43 years ago.

Lakshya Sen went on to play the first match for the Indian men’s team in the semi-finals in which he faced Denmark’s Viktor Axelsen. The Danish player, performing according to his status, gave a tough fight to Lakshya Sen by defeating him in two straight sets 21-13, 21-13 to give Denmark a 1-0 lead.

In the doubles match, the Indian pair of Satwiksairaj Rankireddy and Chirag Shetty defeated Denmark’s Kim Astrup and Mathias Kristiansen to level the lead at 1-1. The Indian pair won the first set 21-18 while the Danish pair went on to win the second set 23-21 despite a tough fight. Due to this, the match was decided in the third set in which the Indian pair performed brilliantly and won the match with 22-20.

In the third match, former world No. 1 and Indian star shuttler Kidambi Srikanth faced Anders Antonsen, where Srikanth won the first set 21-18 but in the second set Anders came back to win 21-12. Did it Srikanth took the Indian team’s lead to 2-1 after winning the decider match 21-15. However, in the next doubles match played against the pair of Krishna Prasad and Vishnuvardhan, the Danish pair leveled the scores with easy wins of 21-14 and 21-13 at 2-2.

Now the last match of the semi-final match was played between HS Prannoy and Rasmus Gemke where the Danish player won the first set 21-13, however in the second set Prannoy came back to win 21-9 and third set. After winning 21-12 in the tournament, the Indian team gave a 3-2 victory over Denmark. HS Prannoy did exactly what he did in the semi-finals and the Indian players showed their mettle in front of a strong Denmark team and won 3-2. With this memorable win, the Indian men’s badminton team has made it to the final of the Thomas Cup for the first time.

For the first time in the history of IPL, 9 wickets fell in the powerplay, Chennai Super Kings out of the race for playoff