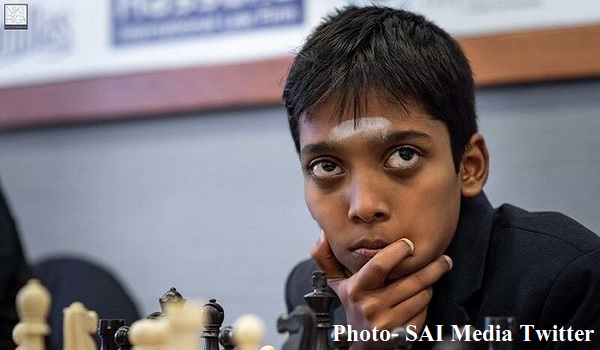 New Delhi, May 21: Indian Grand Master Pragyanand Rameshbabu has registered his second win over world champion Magnus Carlsen in 2022. Pragyanand won after taking advantage of a mistake made later during the match with a Norwegian player. The two players met in the fifth round of the Chessable Masters Online Rapid Chess Tournament on Friday and Pragyanand has kept his chances of progressing to the knockout stage alive after a win over Carlsen.

A fifth round match in the US$150,000 online tournament ended in a draw on Friday, but Carlsen’s one-move mistake cost him dearly. His move was spoiled by placing the Black Knight in the wrong place in his 40th move.

Carlsen was second on the leaderboard after China’s Wei Yi on the second day of the tournament. World’s youngest Grand Master Abhimanyu Mishra is also a part of the 16-member tournament.

“I do not want to win that way!” says Praggnanandhaa of his win after Carlsen blundered: #ChessChamps #ChessableMasters pic.twitter.com/SNOSx8CHgN

16-year-old Pragyanand had defeated Magnus Carlsen for the first time in the online rapid chess tournament AirThings Masters in February.

Then Pragyanananda said after defeating Carlson, “I guess now it’s just a matter of going to bed and resting.”

This thing became very popular then. Pragyananand was asked how will you celebrate the victory. Then he gave this bed-ridden answer.

In fact Pragyanand was not happy with his performance against Carlsen on Friday despite scoring three crucial points.

Note that Pragyanand lost to Carlsen 3–0 in the Best of Four contest. The Norwegian player did this in February at the Oslo Esports Cup in April.

These two have no place in India’s T20 team, Rahul and Rohit will open: Chopra