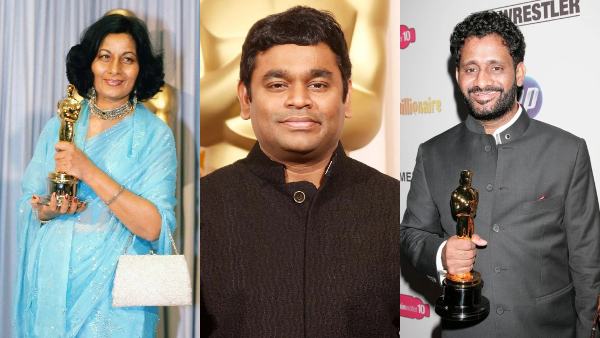 In the history of Academy Awards, several Indian artists have also been celebrated on the international platform beginning with

Mother India,
which was India’s first submission and was nominated for the International Feature Film category.

Let’s take a look at the Indian artists and films that brought home Oscars home,

Bhanu Athaiya
Bhanu Athaiya became the first Indian artist to win the Academy Awards for Best Costume Design for her work in the 1982 film Gandhi. Notably, the late designer passed away in 2020.

A R Rahman
A R Rahman was nominated for Best Original Score category for 127 Hours, as well as for the film’s song If I Rise in the Best Original Song category. However, the music maestro won two Oscars – one for the original score in Slumdog Millionaire and another for the song Jai Ho from the same film at the 81st Academy Awards.

Resul Pookutty
Sound designer Resul Pookutty also won Oscar for Best Sound Mixing for his work on Slumdog Millionaire in 2009. He is known for working on several Hindi, Malayalam and British films.

For Oscars 2022, the Indian documentary Writing With Fire directed by Rintu Thomas and Sushmit Ghosh has earned a nomination in the Best Documentary Feature category. The 94th Academy Awards will take place on March 28, 2022 at 5:30 am IST for the Indian audience.

Rajamouli’s RRR earns a bumper at the box office, budget of 400 crores, the most expensive ticket!

Khabar Lahariya On Documentary Writing With Fire: Our Story More Complex Than The One Going To Oscars