Infinix Smart 6 HD knocked in India, will be available for sale on this day with strong offers
Advertisement

Finally OnePlus 10T launched in India, knowing the specifications will be forced to buy 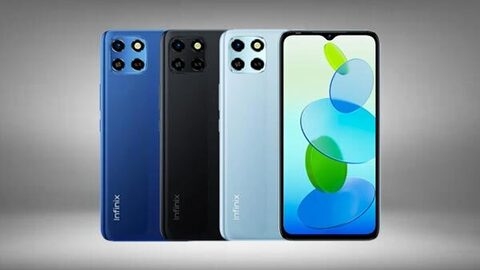 Infinix Smart 6 HD is the most affordable offering in this series. It comes with a single storage option and is ideal for those looking to switch from a feature phone to the new Android smartphone experience.

Infinix Smart 6 HD comes with a single storage option in India. The phone has 2GB RAM and 32GB internal storage. It is priced at Rs 6,799 and comes in three colors – Aqua Sky, Force Black and Origin Blue. Also, let us tell you that the sale of Infinix Smart 6 HD will start on Flipkart from August 12. An instant discount of 10% will be available on the phone from ICICI Bank and Kotak Bank cards. Apart from this, the phone can also be purchased on a monthly EMI of just Rs 236.

In terms of specifications, the phone comes with a 6.6-inch TFT LCD. The screen has a standard 60Hz refresh rate and a waterdrop notch at the top for the front camera. The display has an HD+ resolution of 1600 x 720 pixels and a peak brightness of 500 nits.
Under the hood, there is a quad-core MediaTek Helio A22 SoC. The chipset is paired with PowerVR GE8320 GPU and 2GB of RAM. There is 32GB of internal storage, which can be expanded up to 512GB via microSD card slot. With only 2GB of RAM under the hood, the Smart 6HD runs Android 11 Go version out of the box.

Along with this, the Infinix Smart 6 HD also packs a 5000mAH battery with 5W charging via micro-USD port. It comes with 3.5mm headphone jack, single speaker and support for dual-SIM.