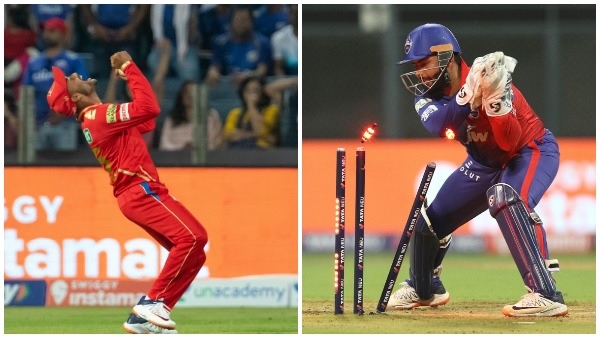 Mumbai, April 20: The 32nd match of IPL 2022, which came into the limelight due to Kovid-19, is being held between the team of Delhi Capitals and Punjab Kings where DC have won the toss and decided to bat first. While Pant is commanding Delhi, Mayank Agarwal has returned to the Punjab camp. Sarfaraz Khan has come in place of Michelle Marsh suffering from Kovid in DC.

The match between Delhi Capitals and Punjab Kings in IPL 2022 has come under discussion due to Kovid-19. Before this match, the members of the Delhi Capitals team have come one after the other to be Kovid-19 positive, which increased the chances of the match not happening, but later the entire team members were Kovid-19 in two rounds and in the second round. After the result of this test came negative in the round, it was decided to continue the match.

This match was to be held in Pune but due to the outbreak of Kovid-19 in the camp of Delhi Capitals, now this match will be held at Brabourne Stadium in Mumbai. Overseas player Tim Seifert has become the latest victim of Kovid 19 in the Delhi Capitals camp, whose rapid antigen test has come positive on Wednesday.

Let us tell you that the cases of Kovid-19 started increasing in the IPL these days, after which the competition had to be postponed for half the season and a few months later it took place in the United Arab Emirates. The Kovid-19 test positive of Australian all-rounder Mitchell March, team physio Patrick Farhart and some other staff members came to the Delhi Capitals camp, due to which the Delhi team decided to travel to Pune for this match against Punjab Kings. Did not travel and now this match is going to be held in Mumbai itself.

Both the playing XIs are as follows-

Changes in cricket board possible after change of power in Pakistan, Rameez Raja may be on leave

Kohli stared at me like this, I batted with my eyes low, my heart was beating fast: Suryakumar Yadav