IPL 2022: KKR lost in a thrilling match, Lucknow made it to the playoffs
Advertisement 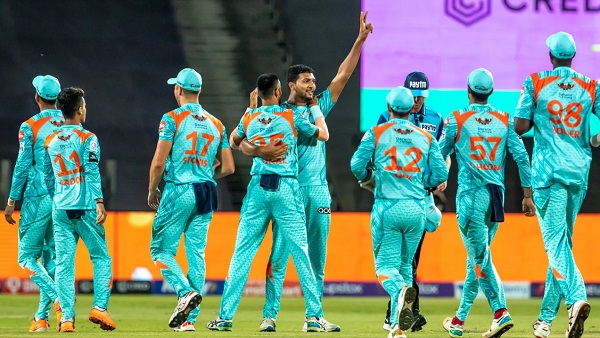 Mumbai :
In the 66th match of the Indian Premier League (IPL) 2022, Lucknow Super Giants defeated Kolkata Knight Riders by 2 runs in a thrilling match. Lucknow had given a target of 211 runs, but Kolkata could score 208 runs for the loss of 8 wickets. With this, Lucknow has reached the playoffs with 18 points. On the other hand, Kolkata’s journey has ended with 12 points from 14 matches. The Lucknow team has become the second team after Gujarat Titans to go to the playoffs. Lucknow entered the playoffs with 9 wins from 14 matches.

Earlier, Lucknow won the toss and decided to bat first. Lucknow scored 210 runs in the stipulated 20 overs without losing any wicket. The pair of KL Rahul and Quinton de Kock started washing the Kolkata bowlers as soon as they arrived. Abhijit Tomar, who made his debut in the third over, dropped the catch of Quinton de Kock. Then de Kock was playing after scoring 12 runs, but after that he scored a stormy century. Quinton completed his second IPL century in 59 balls. At the same time, Rahul remained unbeaten on 68 runs in 51 balls. He hit 3 fours and 4 sixes. While de Kock remained unbeaten on 140 runs in 70 balls with the help of 10 fours and 10 sixes.

Also read- IPL 2022: KL Rahul engulfed, no Indian batsman could do such a thing

While chasing the target, the Kolkata team pulled the match till the end. They needed 21 runs in the last over to win. Rinku Singh scored 16 runs in the first three balls with the help of 2 sixes and 1 four. Took two runs on the fourth ball, but he was caught out on the fifth ball. Then on the last ball, Kolkata needed 3 runs to win, but Marcus Stoinis bowled Umesh Yadav to give the team a thrilling victory by 2 runs. Rinku scored 40 runs in 15 balls, which included 2 fours and 4 sixes. Apart from this, captain Shreyas Iyer scored 50 runs in 29 balls. Nitish Rana scored 42, while Sam Billings scored 42. Venkatesh Iyer could not even open the account. Abhijit Tomar scored 4, while Andre Russell scored 5. In the bowling for Lucknow, Mohsin Khan took 3 wickets for 20 runs. Marcus Stoinis took 3 wickets for 23 runs in 2 overs. Krishnappa Gaitham and Ravi Bishroi got 1-1 wickets.