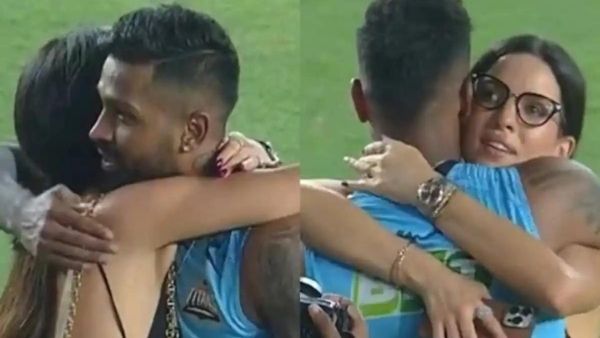 Actually, Natasha also came on the field as soon as Gujarat Titans became the champion. As soon as he came on the field, he first congratulated Hardik for victory and then hugged him. Natasha looked very emotional during this. Natasha became so emotional that even tears came out of her eyes. However, Pandya took them over. Natasha reached the stadium to cheer the team not only in the final but throughout the season.

Hardik was seen in amazing rhythm

This tournament was also very special for Hardik Pandya as a captain and player. Hardik, who returned to the field after almost 4 months due to injury, performed match-by-match for the team. In 15 matches, he scored a total of 487 runs at an average of 44.27 and a strike rate of 131.27. He played at No. 3 or 4 throughout the season and scored four half-centuries. For the first time as a batsman, Pandya scored so many runs in an IPL. Also in B bowling, he took 8 wickets at an average of 27.75.

In the final, Pandya bowled excellently, taking 3 wickets for only 17 runs in his 4 over spell. He picked up big wickets in the form of Royals captain Sanju Samson (14), Jos Buttler (39) and Shemron Hetmyer (11). After this, chasing the target, scored 34 runs in 30 balls.

Rajasthan could score only 130 runs

Batting first, Rajasthan Royals won the toss and scored 130 runs for 9 wickets in the match. Butler (39) was the top scorer, while apart from Hardik (3), R Sai Kishore also took 2 wickets for Titans. Gujarat had a target of 131, which the team achieved by losing three wickets in the first 11 balls. Opener Shubman Gill scored 45 not out in the victory.

‘Whatever happens, the country has to win the World Cup’, after winning the IPL, Hardik Pandya’s big words

Not only the captain, but the coach also created history, great surma could not do amazing things like Ashish Nehra