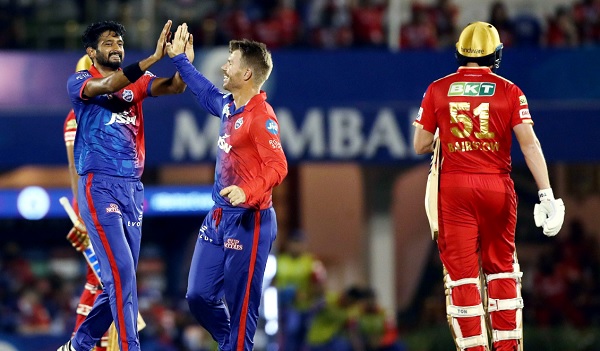 Mumbai, April 20: In the 32nd match of IPL, the Delhi Capitals team won the toss and invited Punjab Kings to bat first and this decision proved to be very correct as the bowlers of Delhi Capitals bowled lethally and bowled the Punjab Kings team for 115 runs in 20 overs. Concluded.

Elected to bat after losing the toss, Punjab had a very good start when the pair of Shikhar Dhawan and Mayank Agarwal started collecting runs quickly but Dhawan fell victim to Lalit Yadav after scoring 9 runs and after that the wickets started falling. It ended only after the collapse.

The next wicket fell on the score of 35 runs to Mayank Agarwal who was bowled by Mustafizur Rahman. Mayank, who did not play in the last match, was returning from injury in this match and he played a fine innings of 24 runs in 15 balls with four fours. After this, 2 overseas batsmen Jonny Bairstow and Liam Livingstone also could not do much. Jonny Bairstow was dismissed by Khaleel Ahmed on the score of 9 runs, then Livingstone, who was in excellent form, was stumped by Rishabh Pant off the ball of Axar Patel.

However, Punjab Kings wicketkeeper Jitesh Sharma once again presented his talent and scored 32 runs in 23 balls. Akshar also took his wicket. On the other hand, the expensive player Shahrukh Khan could not prove himself once again and got out after scoring 12 runs in just 20 balls.

Shahrukh Khan’s consistent failure should come as no less than a surprise to Punjab Kings as there is no reason why Shah Rukh Khan should not perform but his mediocre performance remains a big problem for the Punjab Kings team. Shahrukh was walked by Khaleel Ahmed.

On the other hand, Kuldeep Yadav broke Punjab’s back with quick runs to Kagiso Rabada and Nathan Iles.

Kieron Pollard took retirement from international cricket, was the captain of the team in the 2021 T20 World Cup

Now the box office collection of Indian films is not affected by the magic of IPL, what is the reason?