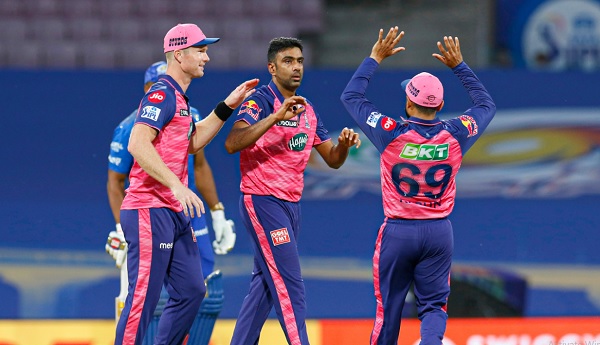 Mumbai, April 2: In the match of IPL 2022, in the first match of double header, Mumbai Indians and Rajasthan Royals were matched in which captain Rohit Sharma won the toss and invited Rajasthan to bat first and Sanju Samson’s team scored some brilliant innings including Jos Buttler’s century. Dum Par scored 193 runs for the loss of 8 wickets in 20 overs, in response to which the team of Mumbai Indians was reduced to 170 runs for the loss of 8 wickets.

This is no less than an alarm bell for the rest of the teams as Rajasthan team is coming out with a good balance this time. He also has strong bowling. Chahal and Krishna can prove to be trump cards for this team in bowling anytime. Apart from Butler in batting, Samson is also in form. Hetmay & Bolt is also proving to be a great buy. This is Rajasthan’s second consecutive win and Mumbai’s second consecutive defeat.

The team of Mumbai Indians came out to chase a big target. The first blow to the Mumbai Indians team was in the form of captain Rohit Sharma, who was dismissed after scoring only 10 runs. After this, Anmolpreet was also dismissed after scoring only 5 runs while Ishan Kishan was playing consistently at the other end and he was doing the same thing as Jos Buttler did for Rajasthan Royals. Tilak Verma kept showing a very stormy style with him. For a time, the pairing of Tilak Verma and Ishaan Kishan kept Mumbai Indians completely in the match but after Ishaan’s dismissal, things seemed to turn around.

Ishan Kishan was dismissed for 54 off 43 balls, while Tilak Verma, who was playing a stormy innings, was also dismissed after scoring 61 runs off 33 balls. This batsman hit 3 fours and 5 sixes. Although Chahal gave two consecutive blows to the Mumbai Indians team in the form of Tim David and Daniel Sams, but Kieron Pollard and Murugan Ashwin did not allow Mumbai Indians to give up easily even in the last overs.

Pollard tried to open some hands but the famous Krishna, who came to the 19th over, bowled very well in the first three balls. This over was so good that Pollard was able to hit only one four despite his best efforts but Krishna bowled the last ball no-ball. However, the new Bumrah could not take advantage of this. Pollard now needed 29 runs to win in the last over.

Navdeep Saini comes in to bowl the last over. Anything was possible in front of Pollard and the very first ball was hit for a jarring four. However, Pollard struggled afterward as Saini bowled some fine lengths. Pollard was later unable to do anything and was dismissed for 22 runs off 24 balls, with this the match also ended.

Alia and Ranbir are getting married in the month of April itself! Tremendous preparation is going on in both the houses

IPL 2022: Rishabh Pant forgot to decide after winning the toss, Hardik Pandya was happy despite the loss