IPL 2022: Wicket drought for Bumrah continued for 7 matches, then made a big record of throwing the best spell of career
Advertisement 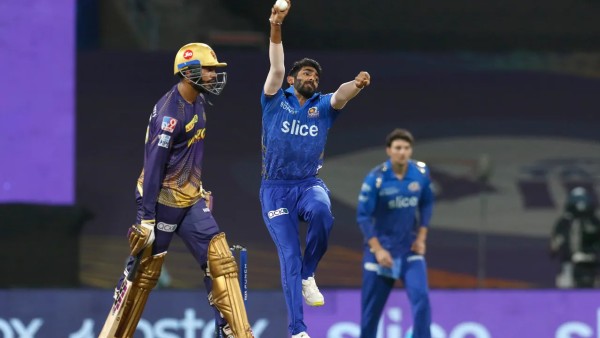 Due to this, the team of Kolkata Knight Riders could score only 165 runs for the loss of 9 wickets in the stipulated 20 overs. Kumar Karthikeya (2 wickets) and Murugan Ashwin (1 wicket) got the first 3 successes for Mumbai Indians but after that Bumrah took 5 wickets, throwing the best spell of his IPL career.

Read more: MI vs KKR: Venkatesh Iyer became the troubleshooter in the comeback match, Mumbai broke Kolkata’s back on the basis of Bumrah

Drought of wickets broke against KKR

Talking about Jasprit Bumrah, he had proved to be economical for his team in the last 7 matches but not a single wicket came in his account. However, against Kolkata Knight Riders, Bumrah had come down with a different intention and first took two wickets in the same over and threw the maiden after taking three wickets in the next over. Bumrah gave only 10 runs in his spell of 4 overs and took 5 wickets in his name. It was also the first 5-wicket haul of his career and the best spell of his IPL career.

Along with this, Jasprit Bumrah has also included his name in the list of top 5 bowlers who have bowled the best in the history of IPL. It is noteworthy that the record of bowling the best bowling in IPL history is in the name of Alzarri Joseph, who took 6/12 for Mumbai in 2019 against Hyderabad. At the same time, in the first season, Sohail Tanveer of Pakistan, who played for Rajasthan, took 6 wickets for 14 runs against CSK. There is also the name of Adam Zampa in this list, who took 6/19 against Hyderabad for Rising Pune Supergiants in 2016, while Anil Kumble’s name is at the fourth place, who played against Rajasthan in 2009 for RCB. He took 5 wickets for 5 runs in his name.

Now Jasprit Bumrah has occupied the fifth position in the list with this performance against Kolkata Knight Riders. Bumrah had started his wickets with Andre Russell, while in the same over he made Nitish Rana his second victim. After this, Bumrah got Sheldon Jackson caught by Daniel Sams, while Pat Cummins was caught by Tilak Verma and on the very next ball, Narine was caught on his own ball and sent back to the pavilion. Bumrah took out 18 balls in his 4-over spell, which included 5 wickets, while there he ate only one boundary.

This Chennai batsman can also bat with left hand, practice in hotel room

MI vs KKR: Venkatesh Iyer became the troubleshooter in the comeback match, Mumbai broke Kolkata’s back on the strength of Bumrah