Is NCP 'soft' towards BJP in Maharashtra, 'angry' Uddhav Thackeray raised the issue with Pawar?
Advertisement 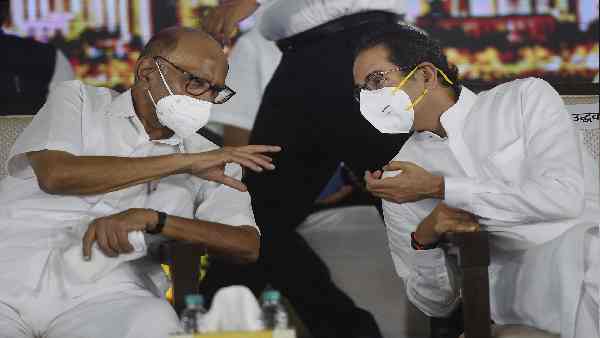 According to a report in the Indian Express, all is not going well in Maharashtra’s Maha Vikas Aghadi government regarding the attitude against the BJP and the matter has increased so much that Chief Minister Uddhav Thackeray has raised the issue directly with NCP chief Sharad Pawar. . According to sources, the Shiv Sena feels that the NCP is refraining from adopting a more strict approach against the opposition BJP, while the central agencies are allegedly targeting the leaders of the alliance. Not one or two Shiv Sena sources have cited several such examples, claiming that Pawar’s party has backed down from opening a vehemently front against the BJP.

For example, in the phone-tapink case, Mumbai Police had earlier asked former CM and BJP leader Devendra Fadnavis to come to its cyber wing of Bandra-Kurla complex, but recorded the statement only after visiting his Malabar Hill residence on March 13. The home department is with the NCP and Shiv Sena is not happy with this changed attitude of the police. Similarly, when the ED arrested NCP leader and minister Nawab Malik in the money laundering case, the way Shiv Sena raised the sky against the BJP, Deputy Chief Minister Ajit Pawar (NCP) remained soft and said, ‘It is on both sides. It’s time to calm down, prevent the situation from getting out of control. Last year, when 12 BJP MLAs were suspended from the House for one year for allegedly misbehaving with the Speaker, Ajit Pawar had said that if punishment has to be given, it should be given for a few hours or a day. Needed. Later, the Supreme Court also declared the suspension decision unconstitutional.

‘Only we are fighting against BJP’

The latest reason for Shiv Sena leaders to grow suspicious against the NCP is NCP’s Rajya Sabha MP Majeed Memon’s tweet praising Prime Minister Narendra Modi. He had said that ‘if Narendra Modi wins the mandate of the people and is the most popular leader of the world, then surely he must have some qualities or some good work which the leaders of the opposition have failed to understand’. For these reasons, a senior Shiv Sena leader has said, ‘We are fighting against the BJP, not only for the army, but also for the NCP. Shiv Sena’s lieutenants and soldiers are on the front foot, while the NCP seems to be on the back foot. NCP is not fighting BJP the way it should be fighting.

NCP leaders are also aware of what Shiv Sena leaders are thinking. A senior leader of the Nationalist Congress Party, on the condition of anonymity, said, “At a time when we are facing the BJP with aggression, some army leaders feel that the NCP should be more aggressive, because We have the home department. An army leader says that maybe this is happening because of the mutual relations between NCP and BJP leaders. Army leaders probably feel that if the Home Department was with him, it would have been easier for him to face the BJP.

‘CM conveyed the matter to Pawar’

Recently, Chief Minister Uddhav Thackeray has also tried to vent anger against the BJP. A party leader has also said, ‘The Chief Minister is unhappy.’ According to him, the CM conveyed this to NCP Chief Sharad Pawar, who himself is in favor of opening a front against the BJP. Some changes will be seen in the coming days. Regarding what kind of change this could be, a minister in Pawar’s party has said that the government is considering opening some cases related to corruption during the previous BJP government. However, Shiv Sena will have to think more before taking a decision on this, because then it was also a part of the same government.

Shiv Sena’s fury has increased because two big leaders of NCP quota Anil Deshmukh and Nawab Malik are already behind bars in money laundering case. Malik has not even resigned from the post of minister, nor has Uddhav Thackeray followed the customary custom of politics. The Enforcement Directorate’s investigation from above has reached Uddhav Thackeray’s in-laws and his brother-in-law Sridhar Patankar’s troubles have increased. Raising this issue in the assembly on Friday, Thackeray had said, “If you want to come to power, come to power.” But, don’t do this kind of ‘false’ work….do not harass us or anyone’s family members. We have never harassed your family members.

Shatrughan Sinha’s attack on the Center over the rising prices of petrol and diesel, said- Modi government has become dictator

Will Naresh Patel and Prashant Kishor’s Khichdi be cooked in Mission Gujarat? Know what is going on in Congress