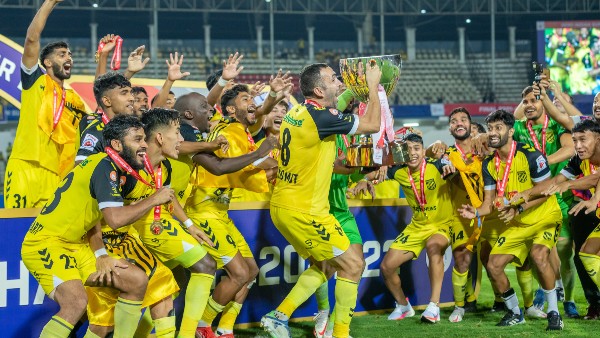 new Delhi. Hyderabad has already won the Hero Indian Super League (ISL) title in one stroke. Hyderabad FC defeated Kerala Blasters FC 3-1 (4-2) in a penalty shootout final at Hero ISL 2021-22. On Sunday, 11,500 spectators held their breath at the Pandit Jawaharlal Nehru Stadium in Fatorda throughout the match. Goalkeeper Laxmikant Kattimani came out victorious in the decider after defending three of the four in the penalty shootout and made his team Hyderabad the champions in the very first final. Their scintillating performances kept Kerala Blasters, the runners-up in 2014 and 2016, out of champions in their third final as well.

The deadlock between the two teams did not break even after 120 minutes of play, as the score was tied at 1-1. Hence, both the teams had to go in the penalty shootout. The first attempt came from Croatian centre-back Marko Leskovic, who was defended brilliantly by goalkeeper Laxmikant Kattimani diving to his right.

Read more: What will be Delhi’s challenge in IPL 2022, head coach Ricky Ponting revealed about the season

Match decided in penalty shoot out

Captain Jao Victor picked up the right top corner with a crisp right footer to put Hyderabad 1-0 ahead. But the effort of Nishu Kumar of Kerala was also stopped by Kattimani. After him, Hyderabad’s dominating Siverio also missed. But Ayush Adhikari scored a goal to bring Kerala to a 1-1 draw. After this, Khasa Kamara scored a goal to make the score 2-1. But after him, Kattimani stopped the effort of Geekson Singh. Halicharan Najri scored the score 3-1 in favor of Hyderabad giving his supporters a chance to celebrate.

The first goal of the match came in the 68th minute

Two years later, both the teams have repeatedly shown their strength to their supporters present at the stands in large numbers. With the score being 1–1 in the stipulated time, the match went into 30 minutes of extra time, the third time in the history of the ISL. But no goal was scored in extra time.

The first goal of the match in stipulated time came in the 68th minute when KP Rahul gave Kerala Blasters a 1-0 lead. After getting the ball on the attacking third, Rahul created a wave of happiness to the supporters of Kerala by hitting a right footer shot from outside the box. Goalkeeper Laxmikant Kattimani could not stop his shot properly after diving to his left and the ball crossed the goalline after hitting his hand.

The equalizer came in the 87th minute

In the 87th minute, a crisp right footer shot from long distance by replacement midfielder Sahil Tavera brought Hyderabad FC to a 1-1 draw. A free-kick from the attacking third was hit by Halicharan Najri inside the D-box, which centre-back Marko Laskovich tried to clear with a header. But the ball reached Sahil and took the field in the 71st minute, the midfielder brought relief to his supporters with a fine volley with the right foot while goalkeeper Prabhsukhan Gill stayed away from the ball despite diving to his right. The first half was goalless. However, Kerala Blasters dominated during this period.

High-pressing was shown from Kerala side for the first half hour, due to which Hyderabad team could not regain the momentum. Despite high-pressing and dominating the midfield, the Kerala players could not convert the opportunities they got. The attacking third and inside the box, the attacking trio of captain Adrian Luna, Alvaro Vazquez and Hoare Pereira Diaz, kept the Hyderabad team in trouble. Kerala came close to scoring in the 39th minute due to relentless attacks when Alvaro Vazquez hit the crossbar. On the other hand, Hyderabad, who came into late form, came close to taking the lead during stoppage time but goalkeeper Prabhsukhan Gill made a brilliant defense on the header of substitute forward Havi Siverio. Thus the score was 0-0 at the end of the first half.

Know who got which award

Hyderabad striker Bartholomew Ogbeche got the Golden Boot. He scored 18 goals in 20 matches this season. During this season, the Nigerian striker has become the top scorer in ISL history with 53 goals. While the Golden Globes award went to goalkeeper Prabhansukhan Gill. Bangalore’s Naorem Singh was awarded the ISL Emerging Player of the Year award. Greg Stewart won the Hero of the League Award. After today’s result, Hyderabad got the upper hand in the clash between the two teams in ISL history. Because in the six matches played before this, both the teams were on equal footing by winning three times each.

What will be Delhi’s challenge in IPL 2022, head coach Ricky Ponting revealed about the season