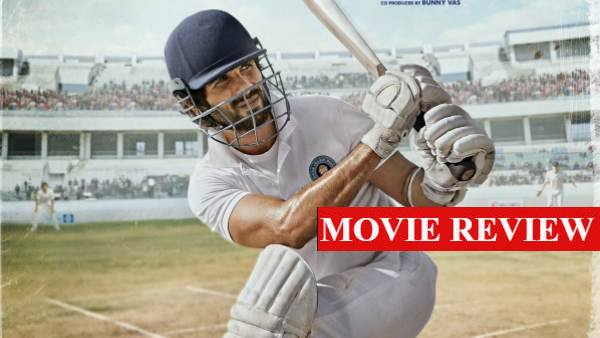 At the age of 26, Arjun suddenly takes a distance from cricket one day. After some time, getting trapped in a false case, he also loses his government job. In such a situation, the entire responsibility of the house falls on his wife Vidya. With time, Arjun gets closer to his son and the distance from his wife increases. Vidya makes every effort to send him back to the job.. but fails. The page of Arjun’s life turns on the day when the son demands a jersey from him. Arjun wants to fulfill his son’s wish by any means. For several days he tries, but is unable to collect money. Arjun is determined to return to cricket once again in order to maintain his prestige in the eyes of his son. But after a gap of 10 years.. and at the age of 36, it is not easy to return to the game. In such a situation, how does Arjun fight with his circumstances.. The whole story revolves around this.

Shahid Kapoor is a brilliant actor and he has proved it with each of his films. He looks impressive in jersey too. Especially when he is struggling for his return to the cricket field, he has looked very strong. Shahid, through his character, shows the best of all expressions of despair, frustration, anger, sadness, shame, victory. At the same time, Mrunal Thakur is perfect in the character of Vidya. Both the characters have been written very carefully. Shahid has some great scenes with Pankaj Kapur (Coach). Real life father-sons look very comfortable together on the big screen. The chemistry of Ronit Kamra (son) and Shahid is also worth watching.

Gowtham Tinnanuri had made the original film and he himself took the responsibility of the remake. There is no doubt that he has been completely true to the remake. Till now many sports drama films have been made in Bollywood, but this mix of cricket and emotion is different. This film tells the story of mutual relationships more than sports. This is the story of a father and a son.. a husband and a wife.. an old coach and a player. Although the film does not connect with the strength on an emotional level, as much as the director tries. Especially the love story of Arjun and Vidya and their journey seems to be very long. Because of which many questions start arising in your mind. Hence, the climax of the film remains average.

Technically, the film is good. The story of the film takes place over a span of 10 years and this gap is shown with great care and ease. The production design of the film should be praised for this. Anil Mehta’s cinematography makes the story strong. Also the cricket part is well shot and choreographed. Where the film struggles is the editing. This 174 minute film moves very slowly in some parts.. especially the first half of the film.

Jersey’s four-song soundtrack by Conscious-Tradition is average. The good thing is that the songs go along with the story. At the same time, the background score of the film is composed by Anirudh Ravichander, which is excellent and works to bring the right amount of emotion at the right place in the story. Let us tell you that Anirudh Ravichander composed the score and soundtrack for the original Telugu film.

Even though Jersey is a sports drama, you will not find sports-related thrills here. If you are expecting exciting cricket moments, you might be a little disappointed. The jersey emphasizes the emotional side of relationships more than cricket. It engrossing the relationship between husband and wife, father and son, coach and player.3 stars to the film from Filmybeat.

Review Kota: The Reservation – The painful reality of Dalit girl students based on the issue of casteism

Akshay Kumar – Emraan Hashmi wraps up the first schedule of next film Selfie, see pictures from the sets