Josh Hazlewood included in the list of most expensive bowlers in IPL history, Bairstow slept
Advertisement 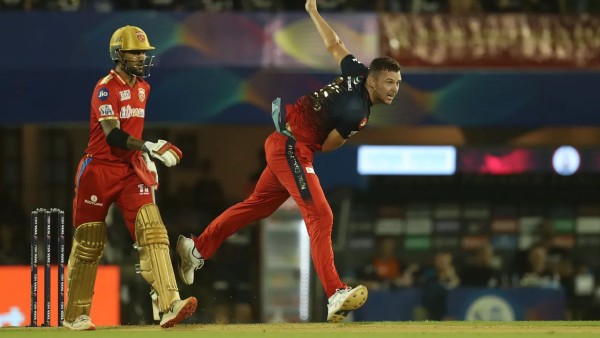 64 runs in just 4 overs against Punjab

RCB, who won 5 out of the first 7 matches of IPL 2022, did not play well in the second leg and managed to win only 2 out of the next 6 matches. In the match played against Punjab Kings, RCB needed to win but first the batsmen of Punjab and then the bowlers stopped them from doing so. Jonny Bairstow (66) and Liam Livingstone (70) played explosive half-centuries for Punjab Kings in this match, due to which they managed to make a huge score of 209 runs. In this match, fast bowler Josh Hazlewood proved to be very expensive for RCB and gave 64 runs in his 4 over spell.

Hazlewood became the fourth bowler to do so

Josh Hazlewood bowled the most expensive spell of his IPL career with this spell and became one of the highest run-getters in IPL history. He became the 7th highest run-getter during a match, while in terms of runs, he occupies the fourth position in this list. The record for throwing the most expensive spell in the history of IPL is held by Basil Thampi, who came in the year 2018 while bowling against RCB. Playing for Sunrisers Hyderabad, Thampi gave 70 runs in this match.

These bowlers have also thrown the most expensive spell

On the other hand, the names of Ishant Sharma and Mujeeb ur Rahman are included, who have scored 66 runs in their 4 overs spell. While Ishant Sharma threw his spell against Chennai Super Kings in 2013 while playing for Deccan Chargers Hyderabad, Mujeeb ur Rahman played for Punjab Kings against Sunrisers Hyderabad in 2019. Umesh Yadav and Sandeep Sharma are on the third position, who had conceded 65 runs in their 4 overs. Umesh Yadav had scored 65 runs against RCB in 2013 while playing for Delhi team, while Sandeep Sharma scored 65 runs against Hyderabad in 2014 while playing for Punjab.

Now the name of Josh Hazlewood has joined this list with Siddharth Kaul at the fourth position. Siddharth Kaul bowled a spell of 64 runs against Mumbai Indians in IPL 2020 while playing for Sunrisers Hyderabad and Hazlewood has also been included in this list after conceding 64 runs against Punjab on Friday. In this list, the names of Varun Aaron (Delhi vs CSK, 2012), Ashok Dinda (Pune Warriors vs Mumbai Indians, 2013) and Marco Yensen (Sunrisers Hyderabad vs Gujarat Titans, 2022) are at the fifth position, who have played their 4 over spell. 63 runs have been looted.

7 fours 4 sixes in his entire spell

The match did not start well for Hazlewood and he conceded 22 runs in his very first over. Jonny Bairstow hit 2 sixes and 2 fours in his over. Hazlewood made a comeback in his second over but Dhawan did the job of collecting 7 runs in this over also by hitting a four. After this, Hazlewood came to bowl his third over in the 16th over, where Jitesh Sharma scored 11 runs from the over by hitting two fours against him, while it was very costly for him to bowl the 19th over of the innings. Hazlewood gave 24 runs in this over, in which Liam Livingstone hit 2 fours and 2 sixes against him.

‘Looks like I am talking to the wall’, Dravid-Lakshman’s funny meeting happened again