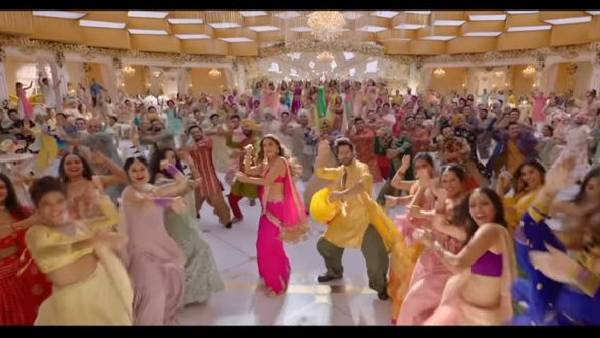 Mumbai, May 28 : The first song of Bollywood actor Varun Dhawan and Kiara Advani’s film ‘Jug Jug Jio’ has been released. The film’s first song ‘The Punjaban Song’, which has been mired in controversy, has now been released by the makers, which is quite spectacular. After the release of the song, it is now being said that in the coming days, the song ‘The Punjaban’ is going to be the pride of weddings. After watching this song, everyone has jumped in the fun of the song. This is the reason that now this song has confirmed its seat for the wedding season.

Controversial song
Anil Kapoor, Neetu Kapoor, Prajakta Koli and Maniesh Paul will also be seen dancing along with Kiara Advani and Varun Dhawan in ‘The Punjaban Song’. The whole family is enjoying together in the song. Let us tell you that some time ago this song was in controversy. Pakistani singer Abrar-ul-Haq had also told Karan Johar a lot about the copyright of the song.

Abrar has accused Karan of stealing this song. Abrar had also talked about taking legal action on this matter of copyright. However, later T-Series and Dharma Productions made it clear that they have the legal rights to cast the song in their film.

rocked social media
There is a wonderful wedding atmosphere in this song. The artists have enlivened the atmosphere with their dance. Along with this, the song starts with Anil Kapoor’s entry and after that Neetu Kapoor can be seen in the bride’s avatar. As soon as it was released, this song has rocked social media.

The film will release on this day
The film ‘Jug Jug Jio’, which is based on a story of divorce, is releasing in theaters on June 24. In this, the chemistry of Kiara and Varun will be seen by the audience. Along with this, it will be shown in the film how the relationship of both reaches to divorce. The film is made under the banner of Dharma Productions. Also the film is directed by Raj Mehta.

These Bollywood beauties are fitness freaks, maintain themselves like this even in busy schedules