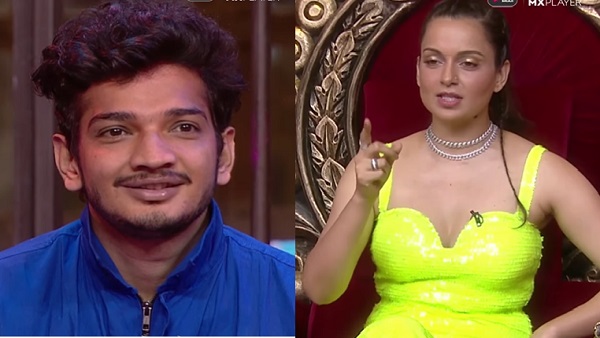 Kangana said this about Farooqui

Yes, in the episode of Judgment Day to be telecasted over the weekend, Kangana Ranaut will assess the performance of the contestants of the show and during this time she praises Farooqui. Kangana tells Farooqui that he is going on a very right path in the show and may win the show too. This episode will be telecast on Saturday. In the promo of the show, Kangana first asks about Munavvar’s well being, in response to which Munavvar tells that the doctor has told that his son has an infection, but now I am feeling well.

In the video, Kangana tells other contestants of the show that look, Munavwap has set an example for you, he is playing so well despite being most ill, so he is an example for all of you. Then Kangana tells Munavwar that if you keep what you have, then you are on the right track. However, Kangana also warned Munavvar during this time and said that it is not right to make others fight for their own benefit. Kangana was referring to the fight that took place between Siddharth Sharma and Karanvir Vohra during a task.

Who is Munawwar Farooqui

Let us tell you that Munawwar Farooqui is a standup comedian and was also lodged in Indore jail for a month last year. He has been accused of hurting religious sentiments in stand-up shows. He has often been making controversial remarks about his show Hindu Gods and Goddesses. However, Munavvar has now given up standup comedy. Munavvar’s show in Bangalore’s Good Shepherd Auditorium was canceled by the police, after which he gave his decision to leave the world of comedy. However, the fans had to say that due to being a Muslim, they have been accused of this.

Kashmir Files: The incident of feeding rice dyed with blood of husband to his wife, know the whole reality

Dhanush appeared for the first time after separating from Aishwarya, made public appearances with both sons