Kerala-Jamshedpur will be face to face; RF Young Champs would like to beat Chennaiyin to continue the winning streak
Advertisement 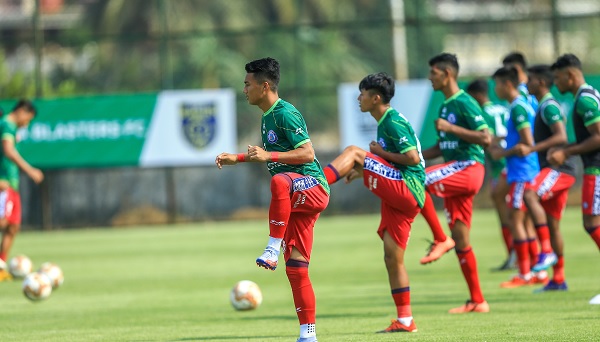 Goa, 26 April.
Kerala Blasters will take on Jamshedpur FC on Wednesday in an interesting fourth round match of the Reliance Foundation Development League (RFDL). This match will be played at Benaulim ground.

In another match of the day, the Reliance Foundation Young Champs team would be looking to secure yet another victory but will have to prove themselves second to Chennaiyin FC at the Nagoa ground.

Kerala have won their first three matches and are joint table toppers with Bengaluru FC. Jamshedpur, on the other hand, beat FC Goa 5-1 in their previous match and hence Kerala will have to play their best game to beat them.

The good thing for Kerala is that they have some great experienced players. The Kerala team did not do justice to their potential against Chennaiyin. Givson Singh had also missed a penalty. However, this team won with the help of a goal from Vinci Barreto.

Jamshedpur’s team played well against Goa. For him, Ayush Adhikari once again showed a great game and this time Kerala will have to be careful with the official but whether the official will play in the next match is not yet decided as in the match against Chennai, Adhikari was taken out of the field in the 57th minute. was moved.

In the morning match, the RF Young Champs will have to perform like the match against Mumbai City FC. Arata Izumi’s team is the youngest in the competition and played well against Mumbai. Especially everyone was impressed by Sanan Mohammad’s game. Apart from these, Gulab Him Bahadur and Rashid CK also showed a good game.

Chennaiyin are looking for their first win so far. The team, led by coach Silophas Alex, has shown signs of improvement after their loss to FC Goa in the first match. Niket N has emerged as the cornerstone of this team’s defense while Sufyan Sheikh is looking strong in the front line.

In the eight-team table, Chennai are ranked seventh with one point while the Young Champs have moved up to fourth. This team has also played three matches so far.