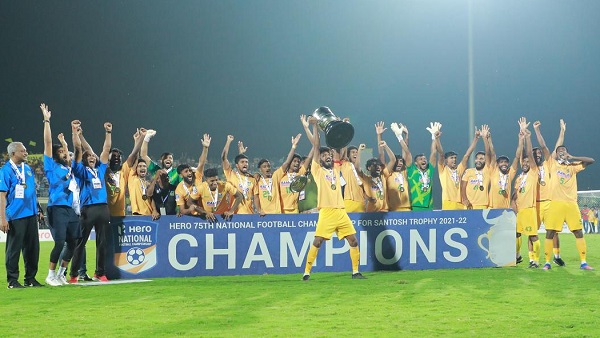 New Delhi. Hosts Kerala beat Bengal 5-4 in a penalty shootout to clinch the Santosh Trophy title at the Manjeri Payyanad Football Stadium in Malappuram, Kerala on Monday. This was Kerala’s 7th title.

By the end of time, both the teams were tied 1-1 goals. The match ended in a penalty shootout. The penalty shootout also saw a tough fight, but in the end Kerala won the match by scoring 5-4. This was Kerala’s first ever Santosh Trophy win on home soil.

Also read- Shimron Hetmyer considers his wife as his biggest coach, criticizes him too

Talking about the match, in the 97th minute, Dilip Orao scored a goal for Bengal with a header. It seemed that Bengal would now win the title by stopping Kerala, but after 4 minutes before the end of the match, Naufal PN of Kerala scored the goal of the match. Then in the penalty shootout, Bengal started with Orao’s goal, but Sajal Bagh missed in the second attempt, due to which Kerala again managed to take the lead. With this, the Bengal team also failed to avenge the loss to Kerala in the final of the 2017-18 season. Even then the match went into a penalty shootout, where Kerala won the match 4-2.

CSK vs RCB: Jadeja injured while trying to catch a difficult catch, was seen moaning in pain on the ground