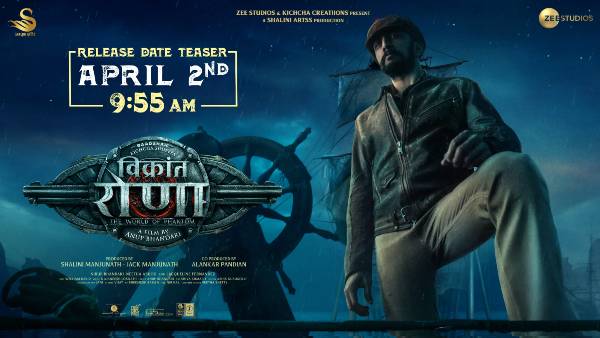 Badshah Kicha Sudeepa’s 3D action adventure mystery thriller ‘Vikrant Rona’ directed by Anoop Bhandari is undoubtedly one of the most awaited films to release this year. Let me tell you, since the makers launched a Jhalak of the film last year and released it in 3D in theaters across the country, the film has created immense excitement and curiosity among the audience, especially the fans of Kiccha. .

In such a situation, increasing this curiosity of the fans even more, the makers have recently announced to launch a special teaser with the release date of the film on April 2, 2022.

Earlier on September 2, on the occasion of Kicha’s birthday, the makers had given the first glimpse of it, which raised the anticipation for the film as Vikrant Rona aka The Lord of the Dark strikes fear in the hearts of his enemies. Was.

‘Vikrant Rona’ which is a pan world 3D film has been one of the most awaited films of the country. From its title launch on The Burj Khalifa to bringing Jacqueline Fernandez on board and even announcing a release in over 50 countries, ‘Vikrant Rona’ has been in the news for every reason.

The Pan World 3D film will release in five languages ​​including Kannada, Tamil, Telugu, Malayalam and Hindi. It is also expected to release in languages ​​like Arabic, German, Russian, Mandarin, English.

Let us tell you, ‘Vikrant Rona’ which will see Kicha Sudeepa, Jacqueline Fernandez, Nirup Bhandari and Neeta Ashok, is directed by Anoop Bhandari and presented by Zee Studios. It is produced by Jack Manjunath under his own production Shalini Arts and co-produced by Alankar Pandian of Invenio Origins.

‘Superstar Yash himself has written most of his dialogues in KGF: Chapter 2’, reveals director