KKR vs RCB: Why was Venkatesh given the 19th over, Shreyas Iyer gave the reason
Advertisement 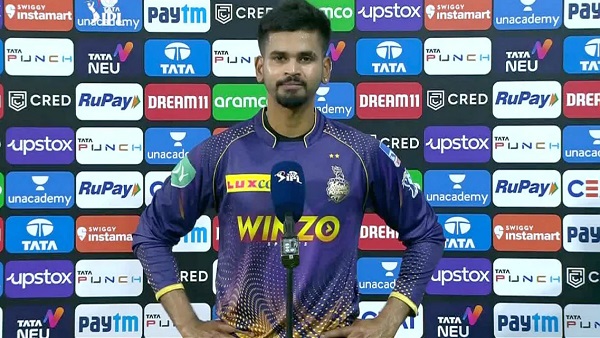 Mumbai : Kolkata Knight Riders suffered a 3-wicket defeat against Royal Challengers Bangalore on Wednesday. In the match, Kolkata struggled till the last over. Their bowlers tried their best to defend 128 runs, but in the end the match turned upside down. Kolkata needed 17 runs in the last two overs. In such a situation, captain Shreyas Iyer gave the 19th over to Venkatesh Iyer, in which he gave 10 runs, as well as took a wicket. But commentators Akash Chopra and Irfan Pathan said that giving Venkatesh the 19th over of the match was a big mistake.

Shreyas Iyer told the reason
Now after the match, captain Shreyas Iyer told why he had given the over to Venkatesh. Shreyas Iyer justified the decision to hand over the bowling to Venkatesh. “We needed a few early wickets, but in the middle overs, the Kolkata batsmen played well. He soon came out with difficulty. I decided to give an over to Venky (Venkatesh Iyer) as he has good experience of bowling at international level. Everyone needs to support him at the start of the season. It is very important. He will soon gain confidence.

Let us tell you that Tim Southee took the maximum 3 wickets for Kolkata, while Umesh Yadav also maintained his form. Umesh took 2 wickets for just 16 runs in 4 overs. While Sunil Narine and Varun Chakraborty took 1-1 wickets. KKR made a strong start by defeating Chennai Super Kings, but they have lost the second match. Now KKR’s next match will be against Punjab Kings on Friday.

Brendon McCullum said – luck did not favor us, due to which we lost

Women’s World Cup: England team reached the final, know when the final match will be held