Know when, where, how did Supriya Sule and Sadanand Sule meet for the first time, interesting love story
Advertisement 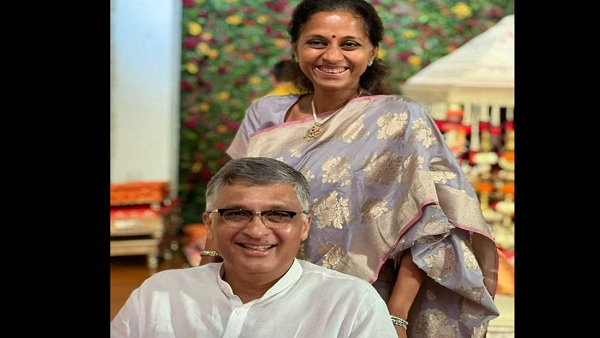 What kind of pudding is this?

He had said that ‘the CM of MP went to Delhi and then OBC reservation got a green signal, what is this khichdi?

‘…then go home and cook’

To which Patil said that ‘If you don’t understand politics, then go home and cook.On which the NCP got angry and took a dig at BJP and Patil for this.

Sadanand Sule, who was furious at Patil, tweeted saying that ‘I am proud of my wife, she is a very good wife, mother and politician, Patil’s statement is an insult to all women.’ Let us tell you that Baramati MP Supriya Sule married Sadanand Sule on March 4, 1991. Both have a son Vijay and daughter Revathi from the marriage.

Supriya Sule used to work for a newspaper

NCP supremo Sharad Pawar’s darling daughter Supriya Sule has done B.Sc in Microbiology and after graduating she went to her uncle in Pune and started working for a newspaper and during the same job at a close friend’s party. Supriya and Sadanand’s first meeting Had happened.

Supriya also went to America for a few years.

He used to work in a company in America at that time. They fell in love with Supriya Sule at first sight and then they became friends and one day both of them felt that now we should get married and then both of them told their story to the family members, which was accepted by the family and both of them got married. happened. After marriage, Supriya also went to America for a few years and she also wrote a research paper on water pollution at Berkeley University which was very much discussed.

Sule also did a job in Singapore and Georgia

After America, Sadanand also worked in Singapore and Georgia and Supriya stayed with him and after that both of them returned to India and Supriya became active in politics.

Sule is the son of the former managing director of Mahindra & Mahindra.

Let us tell you that Sadanand Sule is the son of former Mahindra & Mahindra Managing Director Bhalchandra Sule and Shashi Bhatt. Shashi Bhatt has been a badminton player. She was the daughter of M.D. Bhatt, an Indian Civil Service officer who served as the Chief Secretary of Bombay State.

Rajya Sabha elections: Misa Bharti and Fayaz Ahmed’s name from RJD will be final, will file nomination on Friday