Lakshya Sen kept the promise, presented 'Bal Mithai' of Almora to the PM, this meeting was very sweet
Advertisement 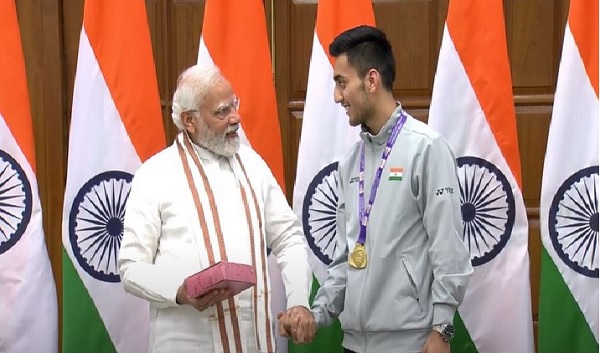 New Delhi, May 22: The Indian team created history on 15 May by winning the Thomas Cup crown for the first time since its inception in 1949. Soon after winning the final, PM Modi had a telephonic conversation with the players, where he requested Indian shuttler Lakshya Sen for ‘Bal Mithai’ from Almora.

Now that the PM has met the players directly after their return home, Lakshya on Sunday presented ‘Bal Mithai’ of Almora to Prime Minister Narendra Modi.

On Sunday, PM Modi interacted with the Indian contingent of the Thomas and Uber Cup, where Lakshya kept his promise.

PM Modi said, “First of all I would like to thank Lakshya for bringing me ‘Bal Mithai’ of Almora. I am very grateful that they remembered my small request and fulfilled it.”

Responding to this, Lakshya said, “I met you for the first time when I won a medal in the Youth Olympics and today is the second chance I have got to meet you. Whenever we get a chance to meet you, it is our Boosts confidence and makes us feel very motivated. Even after we’ve already talked on the phone, it’s really a great feeling for all of us. I look forward to winning more tournaments, meeting you and wishing you ‘Baal Mithai’ Looking forward to bringing it.”

PM Modi further advised Lakshya to maintain this gentle nature of his and keep working hard to achieve bigger goals ahead.

Later talking to the media, Lakshya said, “He (PM) pays attention to small things. He knew that Almora’s ‘Bal Mithai’ is very famous, so he asked me to get it. My grandfather and father also used to play. He also remembers this. These little things are very important. Such a big man is telling you these things, so it feels great to talk to him.”

PM Modi met the team that won the Thomas Cup, asked Srikkanth this question as a ‘journalist’