'Looks like I am talking to the wall', Dravid-Lakshman's funny meeting happened again
Advertisement 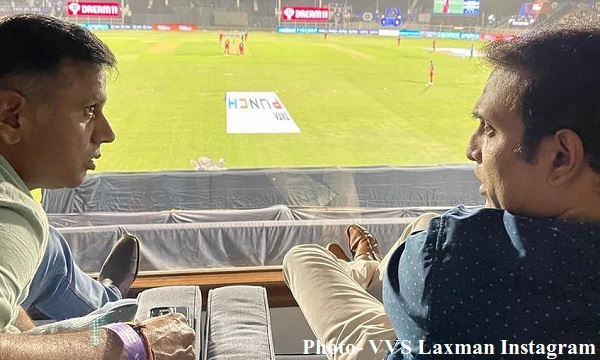 In both the legendary IPL matches

Both the legendary batsmen were present at the Brabourne Stadium during the match between Royal Challengers Bangalore and Punjab and Laxman made full use of the occasion and shared a photo with Rahul Dravid and himself on his Instagram handle. In this photo, both are seen talking to each other but the facial expressions are very stable, serious. Laxman has also given the option of Apps photo of this post very interesting, in which he says – It seems as if I am talking to the wall.

Still very close to each other at the level of work

It is quite a funny thing that both the players are still very close to each other at the level of work. Rahul Dravid is the head coach of the cricket team and is currently the chairman of the National Cricket Academy. Rahul Dravid has successfully carried out the role of the chairman of the NCA in the past, after which he has taken the responsibility of taking over the coaching of the Indian cricket team. Both the players are seated themselves on a nice sofa-like chair and are looking at each other. This photo was done by a girl named Samridhi.

i’m talking to a wall

The caption in the photo read- “Looks like I’m talking to a wall.”

Talking about the 21-year-old match, it took place at the Eden Gardens, Kolkata. Then Australia used to be in full swing. Laxman and Dravid had shared a 376-run partnership and it was the partnership that these two players did after the follow-on. India had scored 657 runs in the second innings on its own. Dravid supported Laxman’s 281 runs and played an unmatched innings of 180 runs in 353 balls.

Both players have a lot of coaching experience

Both these players decided to serve Indian cricket in different ways after their retirement. When Dravid went into the world of coaching and administration, Laxman was also very active in commentary and he has also given his very good voice in Hindi even though he comes from South India. Laxman has also joined Sunrisers Hyderabad while Rahul Dravid has been associated with Rajasthan Royals. Both players also have a lot of coaching experience.