LSG vs KKR: Quinton de Kock scored a century, 100 runs in 20 balls, many records were made
Advertisement 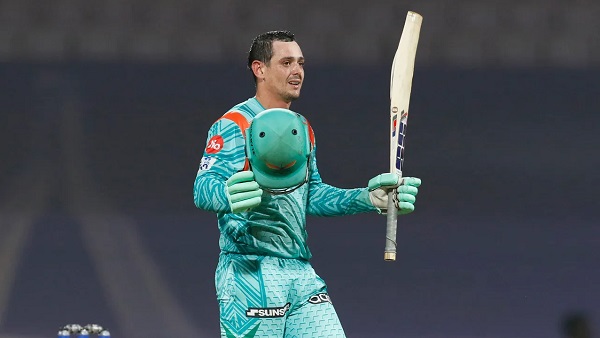 De Kock started playing fast as soon as he arrived. He first completed the second century of his IPL career in 59 balls. After completing the century, de Kock made more rain for fours and sixes. He hit an unbeaten 140 runs in just 70 balls, in which 100 runs were seen coming in just 20 balls. Actually, de Kock got this run through the boundary. He hit 10 fours and only 10 sixes in his big innings. With this, de Kock did the work of collecting 100 runs in 20 balls with the help of fours and sixes.

This was the biggest innings of IPL 2022 so far. Earlier in the same season, Jos Buttler’s innings of 116 runs came from the bat. Along with this, it was also the total 7th century of this season. Jos Buttler has scored three centuries in this season before de Kock, while KL Rahul has scored two centuries.

Apart from this, de Kock has played the third highest innings in IPL history. The record for playing the biggest innings in IPL is in the name of Chris Gayle, who played an unbeaten innings of 175 runs in 2013. Against Pune Warriors then Gayle scored 175 runs in 66 balls, which included 17 sixes.

Made this record with Rahul