LSG vs RR: Jaiswal shines again for Rajasthan, Lucknow stopped the storm of Royals on the strength of bowlers
Advertisement 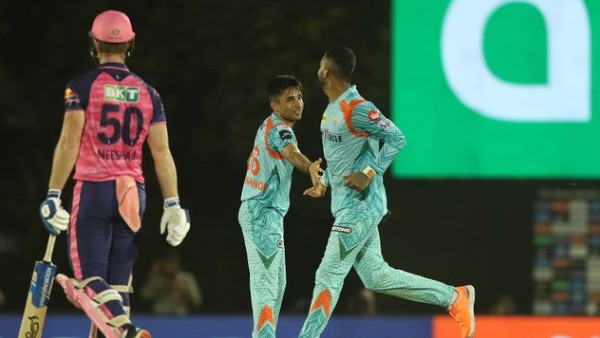 New Delhi. The 63rd match of the 15th season of the Indian Premier League is being played at the Brabourne Stadium in Mumbai, where Lucknow Super Giants take on Rajasthan Royals to become the second team to reach the playoffs. It is a very important match for both the teams to make it to the top of the playoff, in which Rajasthan team after winning the toss decided to bat first and scored 178 runs for the loss of 6 wickets in the allotted 20 overs.

Opener Jos Buttler once again flopped for the team of Rajasthan Royals and became the victim of Avesh Khan in the third over by scoring just 2 runs. Avesh Khan bowled Butler’s wicket and gave the first blow to the Rajasthan team. However, after this the pair of Yashasvi Jaiswal (41) and Sanju Samson (32) handled the innings and put on 64 runs for the second wicket.

Jason Holder broke this partnership for Rajasthan Royals and got his team back. Holder took the wicket of Samson, while Ayush Badoni took the wicket of Jaiswal and pushed Rajasthan on the back foot. Here Devdutt Padikal (39) along with Riyan Parag (17) handled the innings and put on a 45-run partnership for the fourth wicket. Ravi Bishnoi sent both the players back to the pavilion and got his team back.

The Rajasthan Royals team, thanks to the crucial innings of James Neesham (14), R Ashwin (10) and Trent Boult (17), prevented their team from faltering in the last overs and scored 178 runs in the allotted 20 overs. Mohsin Khan proved very expensive for Lucknow Supergiants today and gave 43 runs in 4 overs and could not take any wicket, while Dushmanta Chamira also gave 35 runs in 3 overs.

Read more: ‘Thomas Cup victory is bigger than 1983 World Cup’, Gopichand made a big statement on the historic title

Ravi Bishnoi, returning in this match for Lucknow, completed the spell of 4 overs and took 2 wickets for 31 runs. At the same time, Avesh Khan (3 overs 20 runs one wicket), Jason Holder (2 overs 12 runs one wicket) and Ayush Badoni (one over 5 runs one wicket) did the work of getting their team back by bowling brilliantly.

Profile: Know who are the badminton players who ended the drought of 73 years, how was the journey of Thomas Cup