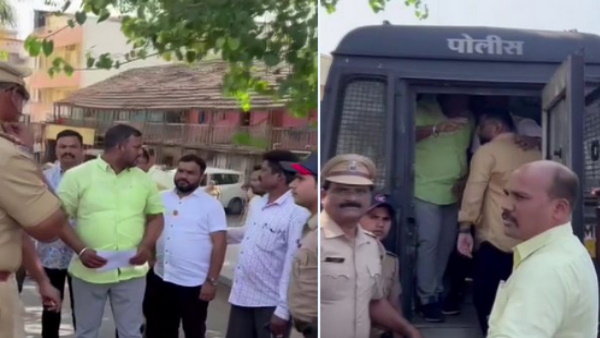 Sinde said this after being taken into custody

“We have detained eight-nine MNS workers, including Shinde, as a precautionary measure, as they came out of the Khalkar Maruti temple in the city,” a senior official of Vishwambaugh police station said. Before being taken into custody, Shinde told reporters that on the instructions of MNS chief Raj Thackeray, ‘Maha Aarti’ and Hanuman Chalisa are being recited at various places in the city. “We performed ‘maha aarti’ and recited Hanuman Chalisa at Khalkar Maruti Mandir,” Shinde said.

Heavy police security was deployed in Mumbai in view of MNS chief Raj Thackeray’s call to “shut down” loudspeakers over mosques. Police deployment was also increased outside Thackeray’s residence ‘Shivtirth’ in Shivaji Park area and barricades were put up on the road to ensure that traffic is not disrupted.

Let us inform you that MNS office bearers Sandeep Deshpande and Santosh Dhuri were earlier served notices under section 149 (to prevent cognizable offences) of the Code of Criminal Procedure (CrPC). After meeting Raj Thackeray on Wednesday, Deshpande came out and interacted with journalists. They were talking when a team of police came to him and tried to take him into custody. However, MNS office-bearers Sandeep Deshpande and Santosh Dhuri managed to escape from the spot in a vehicle when a police team caught him. Tried to catch them. In Pune too, eight to nine MNS workers were detained when they came out of the Hanuman temple after performing aarti, officials said.

Police took them to the police station by private taxi

The police detained some other MNS workers and took them to Shivaji Park police station in a private taxi, the official said. He said the detained persons were earlier served notices under various sections of the CrPC as a precautionary measure.

‘No factionalism in Congress, people are flocking to our party’, Hooda on coronation of new state president