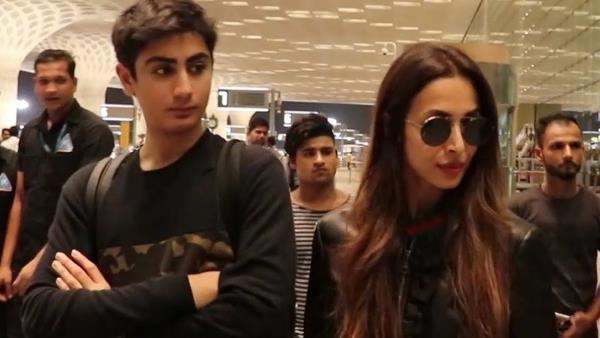 Malaika reached New York as soon as she remembered her son

Let us tell you that Arhaan has gone to New York to study. Malaika was missing her son a lot, so she reached New York to meet her son Arhaan. There she is having a lot of fun with her son and looks very happy.

Malaika has shared photos and videos while strolling on the streets of New York on her Instagram, in which she is seen in a knee-high multicolor frock. Metropolitan Museum of Art Malaika went with her son.

Seeing this style of Malaika, fans are praising

Malaika, while walking in New York with son, shared a photo of red color high heels and a black color purse on her shoulder. Seeing Malaika in deep neck and knee-high frock, it is not possible that she is the mother of a young son like Arhaan.

Beautiful photo of son’s share
Malaika has shared another photo in which Arhaan is seen wearing a black and white shirt, black pants and matching shoes. Mother Malaika has taken the photo of the son from behind.

Malaika shared the photo and wrote this caption

Malaika wrote in the caption of this photo, “Reunite and with it she added a heart emoji. Apart from this, Malaika has shared some other photos too.

Arhaan is the son of Malaika and Arbaaz Khan

Let us inform that Arhaan Khan, who has gone to New York’s International College to study last year, is the son of Malaika and Arbaaz Khan. Malaika got divorced in 2017 after 19 years of marriage with Arbaaz. While Malaika is sharing a relationship with Arjun Kapoor, her ex-husband Arbaaz Khan is dating Italian model Giorgia Andriani.

Why Payal Rohatgi clashed with Kangana Ranaut on ‘Lock Up’, Bollywood queen said – it is better if you do not tell your views

Priyanka Chopra sold her Rolls Royce Ghost car to a Bangalore businessman, know how much it sold for