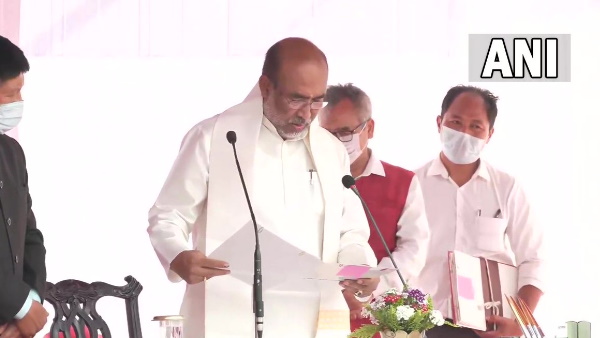 Imphal, 21 March:
BJP leader N Biren Singh was today sworn in as the Chief Minister of Manipur for the second time in a row. He was administered the oath by Governor L Ganesan. Many senior BJP leaders including BJP President JP Nadda were present on this occasion. This is N Biren Singh’s second consecutive term as Chief Minister. A day earlier, N Biren Singh was elected the leader of the legislature party.

After the oath, Manipur CM N Biren Singh said that the first step of my government would be to make it a corruption free state. I will work day and night to eradicate corruption from the state. The next step would be to eliminate any kind of drug-related matter from the state. Third, I will try to see that all the rebels operating in the state are brought to the negotiating table and there is dialogue. These three will be my primary duties.

Apart from CM Biren Singh, his cabinet has also been sworn in. Nemcha Kipgen, Y. Khemchand Singh, Thongam Vishwajit Singh, Awangbou Numai, and Govindas Konthoujam were sworn in as cabinet ministers of the state in Imphal.

The BJP returned to power by winning 32 seats in the 60-member Manipur Assembly. The Congress has been reduced to just five seats. Six members of two political parties, Janata Dal (United), two members of Kuki People’s Alliance and one independent extended their unconditional support to the BJP and their letters of support have also been submitted to the Governor. With this, the BJP-led government will have a strength of 41 and a two-thirds majority in the 60-member Manipur Assembly.

The BJP had won 21 seats in the 2017 assembly elections. The BJP formed the government with the support of four MLAs each from NPP and NPF, one from TMC and one independent. Due to which the number of party members increased to 28 and Biren Singh took oath as the Chief Minister of BJP for the first time in Manipur.

N Biren Singh started his journey as a football player and then got a job in the Border Security Force. After this he got into journalism and became the editor of the local language newspaper ‘Naharolgi Thoudang’. After this his political journey started. He first became a member of the Legislative Assembly in 2002 on the ticket of the Democratic Revolutionary People’s Party. He joined the Congress after winning the first election and in 2003 became the Minister of State for Vigilance in the then Okram Ibobi Singh-led government of the state and took independent charge of the Ministry of Forests and Environment.

Singh became Ibobi Singh’s confidant in this government and, after being re-elected in 2007, became ministers for irrigation and food control, youth affairs and sports and consumer affairs and public supplies. Singh’s relationship with Ibobi Singh turned sour in 2012. In 2016, he resigned from Congress and joined BJP. In 2017 he became an MLA from BJP and also became the Chief Minister of the state.

Cyclone Asani Impact: Mercury reaches 40 in Churu, ‘Loo’ will not work in Delhi