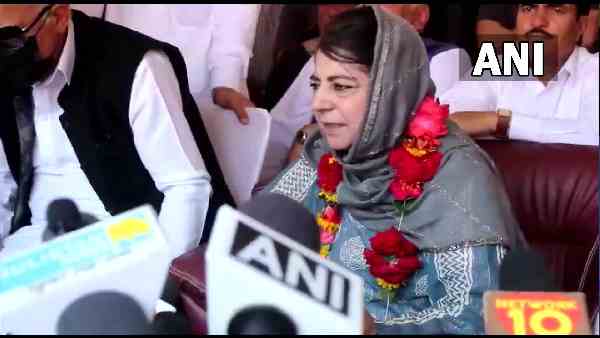 Srinagar, May 25:
Former Jammu and Kashmir chief minister and PDP chief Mehbooba Mufti has gone a long way in opposing the government and has not only raised questions on the Indian judiciary but has also started reciting ballads in the glory of Pakistani judiciary. He has brought the country’s judiciary under suspicion, citing the punishment for the culprits in the incidents of lynching. He has praised the judiciary of Pakistan by referring to the incident of lynching of a person named Akhlaq in Dadri area of ​​Greater Noida, adjacent to Delhi in 2015. It is worth noting that just before the announcement of the sentence of terrorist Yasin Malik, Mufti has made such strong remarks about the Indian judiciary and has also tried to ignore Yasin’s crime.

Appreciation of Pakistani Judiciary and pointing finger at itself
PDP chief Mehbooba Mufti said, ‘There was a lynching of a man in Pakistan, they gave death sentence to 6 people and sentenced 12 people to life imprisonment. After 2015, many Akhlaqs have been lynched here. They are garlanded, not punished. This is the difference between his Judiciary and this Judiciary.’

Sympathy to terrorist Yasin Malik!
Not only this, he refrained from criticizing the actions of pro-Pakistan terrorist and JKLF Chief Yasin Malik just before the announcement of punishment in the terror funding case, saying, ‘Jammu and Kashmir is a political matter. Many people were hanged here, many got life imprisonment. This will not help in resolving the Kashmir issue, but will complicate it further. I think the result of India’s power policy will not be good. The situation is getting worse day by day. Instead of solving the issue, it is getting more complicated.

In fact, in September 2015, a mob lynching a person named Akhlaq in Dadri area of ​​Greater Noida, adjacent to Delhi, was because he was suspected of cooking cattle in the house. Within three months, the police had filed a charge sheet against 15 accused in this.

A man was lynched in Pakistan, they sentenced 6 people to death by hanging& 12 others to life imprisonment. Several Akhlaqs have been lynched here(India)after 2015.They’re garlanded,not punished. That’s the difference b/w their judiciary & this judiciary: PDP chief Mehbooba Mufti

Before Kapil Sibal, 5 big names of Congress, who left the party in the last five months