Mehbooba should tell which BJP leader raised the issue of which temple in which court: Home Minister Anil Vij
Advertisement 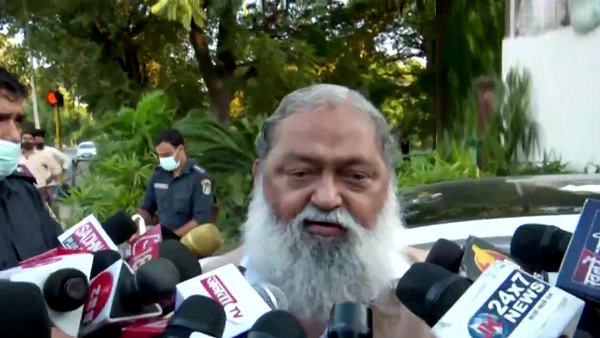 Ambala, Haryana Home Minister Anil Vij targeted former Jammu and Kashmir Chief Minister Mehbooba Mufti. Vij retorted to Mehbooba Mufti’s statement regarding the temple-mosque and said, “Mehbooba Mufti should tell which BJP has raised the issue of which temple, which mosque in which court.”

Haryana Home Minister Anil Vij called the arrest of Punjab Chief Minister Bhagwant Mann after his own health minister was sacked after being proved guilty of demanding commission. At the same time, while giving advice to Congress MP Rahul Gandhi, he said that it is not in the interest of the country to do evil to the country by sitting abroad. Vij made a political attack on West Bengal Chief Minister Mamata Banerjee and said that she does not think that Mamta Banerjee has complete knowledge of the country’s politics. This country has seen the rule of Indira Gandhi. Who imposed emergency and at that time perhaps she (Mamata Banerjee) was in Congress. He said that his government works to strengthen democracy. That’s why Mamta Banerjee should first read the history of the country.

Responding to a question regarding public tussle between BJP MP Arvind Sharma and Chief Minister Manohar Lal, Vij said the matter was being looked into through the high command. It will be resolved. The former Haryana Chief Minister has inducted 8 former MLAs into the Congress party and claimed that many former BJP MLAs and present MLAs are in touch with him. Taking a jibe at this statement, he said that the ship which is sinking, does many things to console its companions. The Congress ship is half sunk and half is about to go into the water. That is why Hooda sahib keeps reciting such lullabies to his colleagues.

On Congress national spokesperson Randeep Surjewala’s statement that ‘Haryana employment is a shop for exploitation of skill workers’, Vij taunted that when will Surjewala stop thinking in reverse. Haryana Rozgar Kaushal Nigam has been formed to stop the exploitation of the employees so that the contractors stop their exploitation. Regarding the obstructing statements of AAP leaders regarding the rally of Delhi Chief Minister Arvind Kejriwal in Kurukshetra on May 29, Vij gave a statement on these allegations of AAP leaders and said that all parties have the right to express their views. Come and keep your word. No one will stop them. He takes responsibility for it.