MI vs CSK: Not Mumbai but this rule shook the world of Chennai, half the team returned in the powerplay
Advertisement 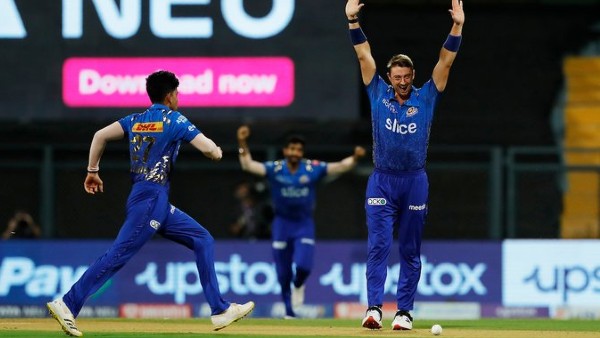 New Delhi. The 59th match of the 15th season of the Indian Premier League is being played at the Wankhede ground, where Chennai Super Kings are facing Mumbai Indians to stay in the race for the playoffs. Mumbai Indians, already out of the race for the playoffs, are looking to end their journey with a win, while CSK’s team has come to keep their hopes alive. In this match being played at Wankhede, Mumbai Indians team won the toss and decided to bowl first and while bowling brilliantly, sent half of Chennai’s team to the pavilion inside the powerplay.

However, for the team of Chennai Super Kings, the rules of IPL became villains more than the bowlers of Mumbai Indians, due to which the wickets started falling. In fact, when the toss was about to take place, a flood light at the Wankhede Stadium had gone off, due to which there was a delay in toss.

Read more: Know why Brendon McCullum will not be seen in IPL after 15th season, will have to leave KKR’s camp

DRS was not available in the first 2 overs

The toss took place after the floodlights were fixed but it took some time to burn out completely due to which DRS was not available during the first 2 overs. This information was given to the players and the umpire during the first over itself, but the way things happened after that, the CSK fans and their camp did not look at all happy.

In fact, Devon Conway was adjudged LBW on the second ball of Daniel Sams’ first over and could not even challenge the umpire’s decision due to the absence of DRS. However, all the cricket experts, including Aakash Chopra doing commentary, were of the opinion that this ball could have left the third stump and would have survived if DRS was available. In such a situation, if DRS was not available, should the umpire not have given his decision more carefully. At the same time, Moeen Ali also returned with a simple catch in the same over.

Uthappa did not even get a chance to take DRS

In the next over, when Jasprit Bumrah came to bowl, he sent Robin Uthappa lbw back to the pavilion on his fourth ball. Chennai Super Kings also did not have DRS available for this wicket, due to which Uthappa had to go back to the pavilion. This ball was more visible in front of the wicket than Conway’s wicket, although due to the height, this decision appeared 50-50. Not only this, when the team of Mumbai Indians comes to bat, they will get the benefit of DRS from the very first over. Due to this, Irfan Pathan and Akash Chopra raised questions on the rule.

Significantly, CSK’s team failed to recover from the initial blows and captain Mahendra Singh Dhoni had to come out to bat in the fifth over. This is only the third time since the year 2020 that Dhoni came out to bat in the powerplay and all three times this opportunity came in front of Mumbai Indians. Let us tell you that CSK’s team had a very poor start due to bad luck and good bowling from Mumbai Indians and they lost 5 wickets at the score of just 29 runs. Due to this, CSK’s team lost 5 wickets for 32 runs inside the powerplay.

Many questions are being raised, but Dhoni said – it is difficult to replace Jadeja