MI vs KKR: Venkatesh Iyer became the troubleshooter in the comeback match, Mumbai broke Kolkata's back on the strength of Bumrah
Advertisement 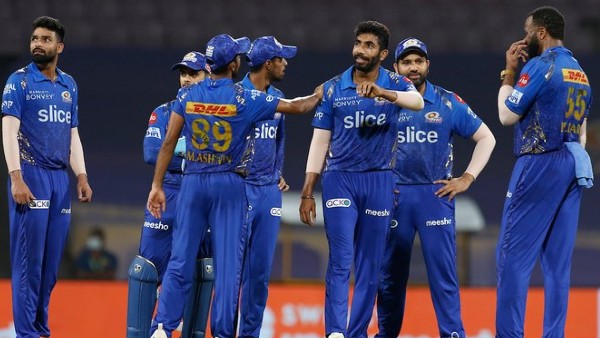 In this match for KKR, Venkatesh Iyer scored 43 runs in just 24 balls with 3 fours and 4 sixes, while Rahane put on 60 runs for the first wicket in just 5.4 overs. . Kumar Karthikeya gave his team the first success by taking the wicket of Venkatesh Iyer, but Nitish Rana continued the fast approach as soon as he arrived.

Nitish Rana also scored 43 runs in 26 balls with 3 fours and 4 sixes, while Rahane contributed 25 runs in 24 balls with the help of 3 fours. Karthikeya gave Mumbai second success by taking the wicket of Rahane, while Murugan Ashwin gave KKR the third blow by sending Shreyas Iyer to the pavilion.

Kolkata blown away by Bumrah’s storm

But after this the storm of Jasprit Bumrah blew Kolkata and Kolkata, which was moving towards the big score, suddenly stumbled. Jasprit Bumrah, who could not get a single wicket in the last 7 matches, started by taking the wicket of Andre Russell in this match and then in the same over, Nitish Rana was also sent back to the pavilion. At the same time, in the 18th over, when he came to bowl his third over, he took 3 wickets and made maiden overs in his name. At the same time, the last over of the innings was also in the name of Bumrah and he gave only one run.

Hall took 5 wickets for the first time in his career

Bumrah conceded just 10 runs in his 4 overs in his bowling spell and took the first 5-wicket haul of his IPL career, due to which Kolkata Knight Riders team could score only 165 runs in the allotted 20 overs for the loss of 9 wickets. It would have been difficult for the KKR team to cross the 100-run mark in this match if Venkatesh Iyer had not played an explosive innings in the beginning. At the same time, Rinku Singh also contributed 22 runs in 19 balls with the help of 2 fours and a six and saved the team from getting all out.

IPL 2022: Wicket drought for Bumrah continued for 7 matches, then made a big record of throwing the best spell of career