More than 1000 children of turtles were left in the sea after filling them in baskets, where did so many come from here?
Advertisement 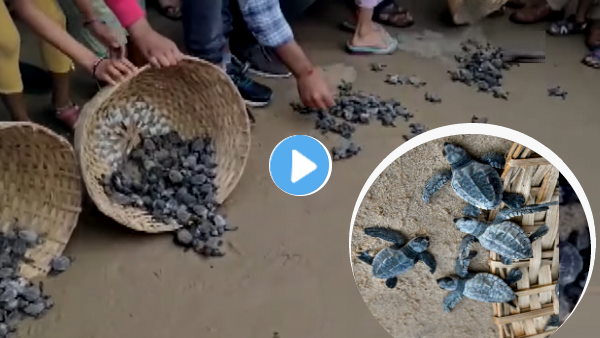 These pictures are from RK Beach in Visakhapatnam, Andhra Pradesh, where a small-sized turtle, called the ‘Olive Ridley Turtle’, has been released into the sea. Forest department officials said that these are rare species of turtles. These days they come out of the water on land.

Dogs and foxes are at risk

The babies of these turtles are seen everywhere on the Visakhapatnam coast. They are hunted by dogs and foxes. Apart from this, their lives remain in danger due to other reasons as well. In such a situation, to save them, they are left stuffed in the baskets. Recently more than 1000 babies of such turtles were released into the sea.

Visakhapatnam District Collector Mallikarjuna and forest officials said that a total of 40,000 eggs were collected from these turtles this year. Turtles were born from them and so far 4,000 turtles have been released into the sea water at different stages.

To prevent these rare turtles from being eaten by dogs and foxes, forest officials have set up hatcheries at five locations along the Visakhapatnam coast.

Staff are busy making arrangements for the release of Olive Ridley hatchlings in the Bay of Bengal this summer as well.

It was told by the Andhra Pradesh Forest Department that these turtles lay eggs in December and after that on the coast of Andhra Pradesh. Those eggs are collected.

PM Modi sleeps only 2 hours, claims top BJP leader, is doing this special experiment with himself