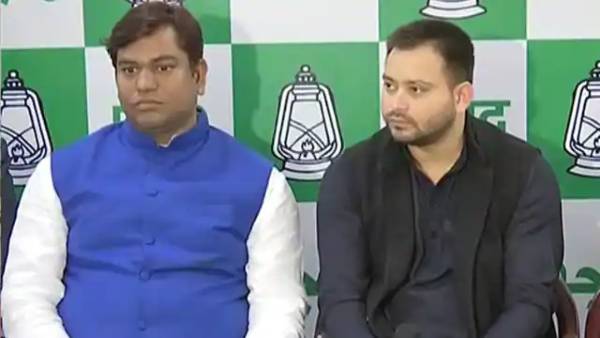 VIP can join hands with RJD

The Bharatiya Janata Party has announced to make Baby Kumari its candidate from Boncha seat. There seems to be a tussle in the NDA alliance due to the by-election in Boncha seat. The Bharatiya Janata Party and the Vikassheel Insaan Party have come face to face. According to sources, Mukesh Sahni is preparing a plan to defeat the BJP this time. In this regard, he can join hands with the opposition party RJD. With this, he can get Amar Paswan to contest on RJD ticket. It is worth mentioning that Mukesh Sahni had fielded his candidate on 53 seats against the BJP in the UP assembly elections. Now in the MLC elections to be held in Bihar, they have announced to field their candidates against the BJP in 7 seats.

By-elections will be held on Boncha assembly seat

Mukesh Sahni had already announced to make Amar Paswan the candidate from Boncha seat. He had hoped that his announcement would be approved by the NDA but it did not happen. The Bharatiya Janata Party announced the name of its candidate, giving a jolt to Mukesh Sahni. After the announcement of the BJP candidate, now Mukesh Sahni has joined hands with RJD to prepare a strategy to give a jolt to the BJP. Let us tell you that in the 2020 Bihar Assembly elections, BJP candidate Musafir Paswan had won from Boncha seat but after his death this seat became vacant and now by-election is going to be held.

Chances of change of power in Bihar

There is also a lot of discussion in the political corridors of Bihar that the Bharatiya Janata Party wants to leave Mukesh Sahni from the cabinet. On the other hand, BJP’s relations with JDU are deteriorating. In such a situation, it is very important to understand the figure of assembly seats in Bihar because if there is a slight mistake, then the power in Bihar can be reversed. Let us tell you that there are total 243 assembly seats in Bihar. There are members in 242 seats but one seat is still vacant. On the other hand, 122 seats are needed to capture power in Bihar, in which the NDA alliance has the support of 127 MLAs. On the other hand, the opposition has 115 MLAs, if there is a slight change in the numbers, there can be a change of power in Bihar. If sources are to be believed, Mukesh Sahni is also preparing a strategy to change power by doing politics of manipulation.