Nadda Vs Kejriwal in Kangra, both will show strength in preparation for Himachal elections
Advertisement 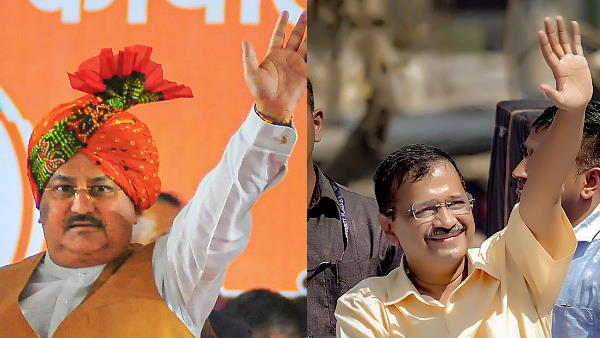 Dharamsala, 19 April. This time in Himachal Pradesh, the election season has started heating up ahead of time. This time a lot of stir is being seen in Kangra, the largest district of the state. On the one hand, BJP National President Jagat Prakash Nadda will stay here for two days and will enthuse the party workers, and on the other hand, Aam Aadmi Party’s national convener Arvind Kejriwal will rally and make him feel his power.

A big change is being seen in the politics of the state with your entry. Assembly elections are due in the state by the end of this year. In this regard, the Bharatiya Janata Party, Aam Aadmi Party and Congress are busy in their respective preparations. After getting success in the recent assembly elections, BJP and AAP are trying to repeat their better performance in Himachal Pradesh elections as well. On the other hand, the Congress, which performed well in the by-polls held in the state last year, is hopeful that its performance will change after its failure in several elections.

AAP and BJP will show strength in 15 assembly constituencies in the politically important Kangra district this week. Where BJP National President JP Nadda will lead the party’s roadshow from Kangra to Nagrota Bagwan on April 22. On the other hand, AAP will organize a rally at Chambi Maidan in Shahpur constituency on April 23 which will be addressed by Delhi Chief Minister Arvind Kejriwal. Sources said here that Nadda is likely to visit Kangra to attend a wedding ceremony at Nagrota Bagwan. The party functionaries of Kangra took the opportunity to show their strength in the form of a roadshow a day before the AAP rally on April 23.

BJP co-media in-charge Karn Nanda said that in the present era, the use of social media is very important for a party. Through social media, many political parties try to spread misconceptions among the public, which BJP will fight on the ground. He said that the Aam Aadmi Party is misleading the public on social media like making an inactive BJP worker a member of AAP and telling that he is the District President of Scheduled Caste Morcha. Whatever effort you make, it will not be able to set your feet in Himachal.

BJP state president Suresh Kashyap said that after the roadshow on April 22, Nadda will address a rally at Gandhi Maidan in Nagrota Bagwan. He said that there will be no impact of AAP in Himachal and BJP will again come to power in the 2022 assembly elections.

Meanwhile, AAP leader from Dharamsala Rakesh Chaudhary claimed that Kejriwal’s rally at Chambi Maidan in Kangra on April 23 would be an eye-opener for the ruling party. He said that AAP already has influence in the state as it has forced the BJP government to announce 125 units of free electricity and free water to the people in rural areas of Himachal. He said that BJP is following the Delhi model of AAP government in Himachal.

Manipulation politics is also in full swing in Himachal Pradesh these days. There is a discussion that many big leaders of BJP and Congress are also in touch with Aam Aadmi Party. Now it will be interesting to see whether the party makes a common worker as the CM face or chooses a leader from BJP or Congress. Many leaders inside the house are struggling to become the CM face.

Sanjay Raut raised questions on BJP regarding Delhi violence, said this about tension in Sri Lanka and Ukraine