Never got a chance to play in the World Boxing Championship due to Mary Kom, now history is won by winning gold
Advertisement 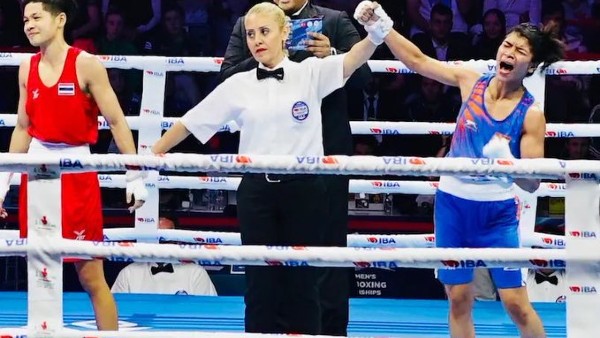 New Delhi. Indian woman boxer Nikhat Zareen on Thursday included her name in the pages of history and added it to the best list, reaching which is a dream of every boxer in the world. Nikhat Zareen has won the World Championship title by defeating Thailand’s Jippong Jutamas 5-0 in the 52 kg weight category final match of the World Boxing Championship being played in Istanbul. Nikhat Zareen has become the 5th Indian woman boxer to achieve this feat, while the last time Mary Kom won this tournament was 4 years ago.

Apart from Zareen’s gold, Manisha Maun (57kg) for India and Parveen Hooda (63kg), participating in this tournament for the first time, also won bronze medals. A 12-member team from India had come to take part of this tournament, where even though one medal has come in its account, but after 4 years, the crown of World Boxing Champion has definitely come in India’s part. Mary Kom last won this title in the year 2018 in the 48 kg weight category.

Due to Mary Kom, there was no chance of trolls in 2019

Zareen Khan might have brought the title home in 2019 itself but unfortunately that year, boxing legend and defending champion Mary Kom decided to enter the flyweight category. Due to which Nikhat Zareen was denied a chance of trials by the Boxing Federation of India. Seeing her consistency in performance, BFI decided to send Mary Kom and she won the bronze medal for India, winning her 8th medal at the World Boxing Championship.

This was not the first time for Zareen that she had to fight with her destiny. Since childhood, his journey to reach here was full of difficulties and in this his parents supported him a lot. Zareen wanted to become a boxer, due to which she had to make a lot of changes in her dress and hair care. While the society and their relatives said a lot about this, their parents decided to make their daughter’s dream come true and always supported her.

Champion made because of parents

When Zareen spoke to news agency ANI about her victory, she told that all this was possible only because of my parents who supported me at every turn and stood by me in difficult times. My injury made me stronger than ever. I decided to fight and work on my weaknesses in the last 2 years and decided not to give up on my goals. I was determined to give my best.

Significantly, it is the result of her determination and hard work that she has won this title for the second time in her career by defeating Thailand’s Juatmas. He had earlier also won against this boxer in the Thailand Boxing Open played in 2019. This year has been full of achievements for Zareen. In February she won two gold medals at the Strandja Memorial and became the first Indian female boxer to do so. India’s best performance in the World Boxing Championship came in 2006 when it won 8 medals including 4 Gold, 1 Silver and 3 Bronze. India has so far won a total of 39 medals (10 gold, 8 silver and 21 bronze) in this tournament.

Nikhat Zareen: Do you know the meaning of ‘Nikhat’ and ‘Zareen’? Gold spreads fragrance by winning gold